The Glory of the Games Puts the Spotlight on Christian Olympians

Chad Bonham interviewed numerous Olympians for his new book The Glory of the Games. We talk to him about the athletes, writing, and what the Olympics mean to him. 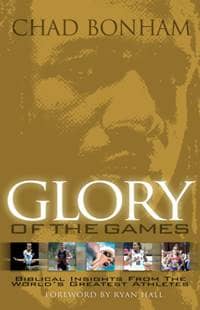 Beliefnet blogger and author Chad Bonham set his sights on the gold this time around. He interviewed Christian Olympians about their lives, their beliefs, and their accomplishments in sports, compiling them into a book that highlights Biblical principals and what it means to be a Christian in the Olympic games. We caught up with him to discuss the book, what drew him to the Olympics, and his own personal experience with the games.

Check out the book here!

What drew you to writing about the Olympics?

I have been a fan of the Olympics since I was about nine years old. I always had the crazy dream of being an Olympian one day but God didn’t bless me with that level of athletic ability. So I settled on writing about Olympians instead. And just being able to meet these people and in some cases develop friendships with them has been pretty amazing.

What do you think makes the Olympics such a special event?

The Olympics represent the best of the best from pretty much every nation of the world. It’s the ultimate competitive event and so many of the athletes are competing for ideals that transcend the quest for fame and fortune that has became all too prevalent within professional sports today. That’s not to say that the Games are free of commercialism or selfish motives, but you can still find a purity within these Olympians—even in the attitudes of the pro athletes that compete—that’s hard to find elsewhere.

Which interview for the book was your favorite?

That question is like asking me to pick one of my favorite three sons! But like my kids, each interview subject had its own unique personality. A couple that standout would be Tamika Catchings and Ruth Riley. That’s probably because I’ve always appreciated their servant’s hearts and their willingness to always be a part of various projects I’ve worked on in the past. Tamika is especially a great story because of all she overcame as a young girl. I also loved Bobby Jones’ story. His quest to live with integrity is something that should inspire all of us.

Do you think that faith plays a role in these athletes’ ability to train themselves for an event like the Olympics?

I do think that’s true, but mostly because it helps them deal with adversity and it helps them maintain a healthy perspective on why they are training in the first place. Ultimately, these athletes are no different from non-believing athletes in that they are naturally gifted and have crazy discipline to push them through the tough times. I think faith really kicks in, however, after the Olympics when they have to deal with either falling short of their goals or the pressures that come with success on such a grand platform.

What is your personal most inspiring Olympics memory?

There are so many that come to mind. The Miracle on Ice is the first great memory I have of the Olympics. Then pretty much anything from the 1984 Summer Games in Los Angeles—Carl Lewis, Edwin Moses, Greg Louganis, Mary Lou Retton, etc. It was a star-studded two weeks that I think set into motion the future success for US Olympic teams. A few other memories would be Shannon Miller and the Magnificent Seven (Shannon is from Oklahoma, so we were closely watching her story) and when Kerri Strug landed a vault on her injured leg.

But I think the absolute most inspiring Olympic moment was when British runner Derek Redmond pulled his hamstring during the 400-meter final in 1992 and his father ran out onto the track and helped him across the finish line. If you weren’t crying after seeing that, you might want to get an X-ray to see if you still have a heart.