An Episcopal priest says NBC's 'The Book of Daniel' doesn't accurately reflect the priestly life--but shows hope for the future. 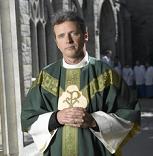 There has been a mild flurry of outrage from Christian conservatives about NBC's new series "The Book of Daniel," airing Friday nights on NBC--accusations that it "mocks God" and shouldn't be shown, and that right-thinking people certainly shouldn't watch it. I just don't see it myself. Jesus (played by Garret Dillahunt) appears in the show, looking as he is usually depicted, with a white robe, long hair, and beard, and he--a confidante visible only to Daniel--comes off better than most of the other characters. It's not God who is mocked in "The Book of Daniel": it's everybody else.

There are lots of funny improbabilities in this show about Episcopal priest Daniel Webster--yup, a descendant of that Daniel Webster--and his world. The priest (Aidan Quinn) and his family live in a house far more palatial than most rectories. However they came by such wealth, I want their kitchen. They have a wise and loyal cook/housekeeper--also missing from my house when I was a rector--who clearly adores all of them. The bishop (Ellen Burstyn) appears to be a daily presence in his office, an experience unlike that of most clergy, who can go months without laying eyes on the bishop unless they misbehave.

Come to think of it, maybe that's why we see so much of the bishop. Everybody in this show has a disconcerting secret, which, if common knowledge, could lead to a quick change in pastorate. Webster's wife (Susanna Thompson), beautiful and vaguely repressed, likes her martinis too much. His adopted son (Ivan Shaw) is horny as a toad and is sleeping with--well, they don't really sleep--the daughter of his dad's really scary parish warden. His 15-year-old daughter (Allison Pill) sells--but supposedly does not use--marijuana. His well-adjusted gay son (Christian Campbell) is a surviving twin; his brother died of leukemia, a fact that seems not to hang over the family as explicitly as it does in real ones.

Webster himself is addicted to Vicodin; he keeps a bottle in the car, one in his study, another in the drawer of his nightstand. He pops one right after an all-nighter down at the police station with his daughter and just before preaching a sermon to a congregation that includes his bishop. Jesus often appears just as Daniel is reaching for the bottle: It's a running argument between them.

The Vicodin must be why a fine actor like Aidan Quinn plays Webster with such a deer-in-the-headlights cluelessness. Somehow Webster's response time lags. He can't quite take hold, can't quite keep up. The moments when one might reasonably expect him to be a commanding, believable presence--in the pulpit, say, or presiding at the Mass, opportunities to demonstrate leadership that most people don't have--he seems diffident and unsure of his right to be there. Things happen to Daniel, and he is nonplussed by almost all of them. Maybe he'll become more of an agent himself as the series develops. All we've learned from him theologically, so far, is that everyone screws up--good to know, but it doesn't make a person a leader.

One scene provides a clue that better things are to come. An elderly parishioner lies in a hospital room, plainly near death. After a dizzying day with his complicated family, Daniel arrives and speaks gently with her, telling her it's all right to let go. This she does, a little more promptly than most of my folks do, but nevertheless, we glimpse the blessedness of a death whose time has come, something every clergy man or woman beholds with wonder each time it happens, no matter how many times we see it. Daniel leaves the hospital, gets into his car, and Jesus is there in the passenger seat. They look at each other and drive out of the parking lot, colleagues in a ministry grounded in love.

I guess what troubles some church folk about "The Book of Daniel" is the skeletal contents of the clerical closet--the dysfunction, the addiction, the adultery, the hypocrisy. Maybe some people don't like to think that a priest might have a gay son and love him. Maybe they think there aren't enough scoldings in the show. The lurid stuff is laid on a bit thick--most clergy have something in their lives that they wish with all their hearts were different from what it is, but few who are still working have as many things going wrong all at once as Daniel does.

So far "The Book of Daniel" lacks depth. Its many subplots tease us along intriguingly, but none of them weighs enough on its own either to ask or to answer a question. We meet some interesting people in these first episodes, but they all need more flesh if we are to come to care about them.

With all its excesses, though, "The Book of Daniel" is fun to watch--it's a television show, for heaven's sake, not a seminary class. The characters are just warming up, and the very strong cast has only begun working with them.