Extreme Makeover: A Teen Take on the New Testament

With quizzes, beauty tips and guy talk, Revolve looks like a fashion magazine. Until you notice the chapter and verse markers.

Beliefnet
Flip through the brightly colored magazine Revolve and you'll see skin care tips, top ten lists, personality quizzes, and Q&As that focus on teen angst. There are splashy "Guys Speak Out" sidebars and callouts that appear to give fashion advice. 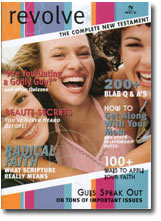 But look closer at the actual text of most pages, and you see lines like "During that time King Herod began to mistreat some who belonged to the church. He ordered James, the brother of John, to be killed by the sword."

Huh? What's King Herod doing next to what could be "Hottie of the Month" photos?

Yep, it's the Bible-but with packaging that may just be inspired. Revolve: A New Look at the New Testament mixes teen mag aesthetics and Scripture, aiming to provide a "modern look at the New Testament with hundreds of applicable insights for daily living." All 27 books of the New Testament run side by side with polls like "Are you Dating a Godly Guy?" Looking nothing like the Good Book, Revolve was designed to spare teen girls Bible embarrassment should they want to bring scripture with them to school, to the mall or to their next basketball game. Aside from the words "The Complete New Testament" slicing across the cover, one might never suspect that the glossy magazine, teeming with photos of preternaturally happy, attractive gals, was anything more than a new entry into the already crowded teen 'zine market. And that's what Revolve's creators want. "Teens were saying that they found the Bible to be too freaky, too big, too intimidating," says Laurie Whaley, Brand Manager for the New Century Version at Thomas Nelson, one of America's major Bible publishers and part of the Revolve team. "Revolve shows girls that reading the New Testament is just as easy as reading an issue of Seventeen or Vogue." 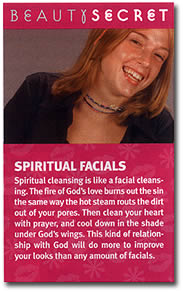 The sidebars and callouts are a testament to the cleverness of Revolve's editors. Particularly sharp are the ingeniously worded "Beauty Secret" tips, such as "Applying Foundation": "You need a good, balanced foundation for the rest of your makeup, kinda like how Jesus is the strong foundation in our lives." Who knew that Jesus and Max Factor had so much in common? The "Bible Basics" sidebars are easily digestible tidbits explaining terms like "Holy Spirit" or "salvation," while the "Bible Bios" acquaint us with the cast of characters in both Old and New Testaments (one bio begins "Leah's husband was in love with her sister. What? You ask"). However, it's still hard to wrap my head around the cell-phone toting character accompanying Bathsheba's write-up. And, though Whaley assures us that real boys weighed in on "The Guys Speak Out" issues, I have a hard time believing most teen guys are enlightened enough to favor girls who always dress modestly and make schoolwork their first priority. (Sample question: "What do you think about the way girls dress?" Answer: "There's way too much showing most of the time. I think that's really gross.") The answers to many of the Q&As fall squarely in the conservative Christian camp ("God made guys to be the leaders. That means they lead in a relationship"), which may make the mag less accessible to more moderate Christian teens. However, one section ecumenically urges teens to "visit another denomination's church, get to know your fellow Christians." And though a Q&A column counsels against watching too many junk shows, it says "God is everywhere, even on MTV."

As I found myself flipping from page to page, gobbling up all the Good News goodies, I realized that I wasn't actually reading the Good News itself. Sure, I know how the story ends, but ostensibly, I picked up the 'zine for the feature and not just the shorts. Additionally, I'm an adult and should have an attention span longer than the average teen, which doesn't necessarily bode well for the intended audience. Then again, learning by osmosis is a favored technique among teens. The design is off the hook (MTV-speak for "crazy good"), the language is accessible (Revolve uses the New Century Version), and the mimicry of the teen magazine format is perfect, even down to advertisements for other Nelson titles. It's a little disconcerting to see ads flanking the covers of the New Testament, but at least one of those annoying subscription cards didn't fall out.

The beauty tips and quizzes are loads of fun, but the real strength of Revolve may be in how its sidebars encourage volunteerism and address serious subjects, such as rape and eating disorders, with compassion. Whatever your denomination, that's what the New Testament is really all about: love for one another.