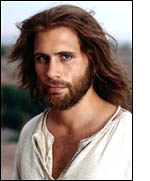 There's something pretentious in calling a television miniseries an "event," as if a miniseries is in the category of, say, D-Day or The Battle of Bunker Hill. But CBS seems within its rights with the four-hour film simply titled "Jesus." Millions who regard the central character as central in their lives are tuning in (it continues May 17 at 9 p.m. to 11 p.m. ET/PT), and (with May sweeps in full swing) the mini-series is even outdrawing, in head-to-head competition, "Who Wants to Be a Millionaire?".

Curiously, nearly every last one of these viewers already knows how the story comes out; the suspense here is not what happens to Jesus but how he's being portrayed.

The short answer is entertainingly: Jeremy Sisto's Jesus has little of the stained-glass reverence that has marred some past productions. The production succeeds too in giving viewers a new appreciation for this historical figure who, for better and worse, has so impacted what we call Western Civilization.

The "worse and the better" are frankly faced. In a prologue of two quick scenes that opened Sunday night's installment, a robed and bedecked priest sternly condemned "in the name of Jesus" a prisoner tied to a stake, declaring him a heretic as flames leapt up. Cut to a First World War battlefield, when "Christian Europe" is killing its sons. We hear screams, and the blast of artillery shells. The camera dollies in on one soldier screaming in pain, "Jesus! Jesus!"--the desperate prayer of the dying.

Later, in what amounts to a second temptation scene in the Garden of Gethsemane, Satan showed Jesus similar scenes, previewing for him how he will be misused through the centuries if he follows God's will and is crucified.

This is a sobering thought, and a major charge that atheists have often made against the Christian Church--particularly sobering because it's true. Jesus has been terribly misused, since the days when the church persecuted heretics, to today's television evangelists who have used him to gain wealth or political influence. Clearly this "Jesus" is for the thinking viewer.

To keep us thinking, the filmmakers place Jesus firmly in his historical context: family man and political figure as well as savior--and they draw their portrait from several sources. Jaqueline Bisset plays Mary, the mother of Jesus, as a forceful woman (though not so forceful, thank goodness, as in the recent TV film "Mary, the Mother of Jesus"). She follows Jesus and his disciples around, as Luke reports several women did. At several points, Mary calls to her son's mind scenes from his birth and infancy (the filmmakers even work in a miracle story from one of the apocryphal infancy gospels about the child Jesus healing a bird killed by his cruel playmates!).

It is Mary who befriends Mary Magdelene after the latter is intrigued by Jesus' merciful dealing with a woman caught in adultery. Feminists will like this character too: The woman tells Jesus that if she were a man, she would like to have been one of his apostles. He tells her she can bear witness to what she sees. Because this is one of the chief marks of an apostle, the film intimates that women, even in a patriarchal society, can have an important, if not official, role in the spread of the faith.

Family does have its limits. There is no hint of the rift between Christ and his family reported in the third chapter of Mark, in which they have apparently heard distorted reports about his preaching and, thinking him insane, set forth to grab and take him back home!

Following Catholic dogma that maintains the perpetual virginity of Mary, there is no notice of Jesus' brothers, mentioned in three of the Gospels (both Paul in a letter and Luke in the Book of Acts even name a James as the brother of the Lord).

"Jesus" also followed Catholic practice in the baptism scene: John poured water on Jesus from his cupped hands. Only in a few, largely Protestant, productions is Jesus immersed, as in the early church, when the baptized person symbolically entered the grave before being raised to new life.

The film departs from the Gospels in other ways. Sunday night, a bloody battle between Romans and the Jewish revolutionaries known as Zealots was woven in, a theme that played prominently in 1961's "King of Kings." Levi, the tax collector, was going about his hateful business guarded by a small contingent of Roman prisoners, when suddenly a band of horsemen attacked savagely. Jesus, traveling to the village with his disciples, confronted Barabbas (yes, that Barabbas). With the Zealot chief crouched on the ground over a wounded Roman, his short sword at ready, Jesus pleaded for the Roman's life. But the guerilla scornfully declared they must free their land, and coldly slits his prisoner's throat. Jesus reminded Barabbas they must win their enemies through love, not blood.

Looking on was a man named Judas, who affirmed Barabbas's statement that only by the sword would the nation win their freedom. Jesus cast a look around at the bleeding bodies on the ground and demands, "Are we any freer now?"

This "historicized" Jesus is wonderfully human. He starts a water fight with his disciples, engages in a brief game of tag, and dances with the crowds at parties. He speaks conversationally, not in any pseudo-King James manner. Sisto is no El Greco-thin ascetic but a robust, appealing man we readily believe would be attractive to adults and children, and who could stand the strain of the life of an itinerant carpenter.

What is missing, and what Franco Zeffirelli so skillfully portrayed in "Jesus of Nazareth," is Jesus's teachings. The movie was more than an hour old before Jesus told a parable, the short one about finding treasure in a field, and even this was not finished, as there was an interruption. None of the great parables are told; instead, scriptwriter Suzette Young concentrated on miracles--walking on the stormy sea, curing the sick, and raising Lazarus from the dead--thus affirming that Jesus is divine as well as human.

Taking the historical long view allows the filmmakers to tone down the latent anti-Semitism in the Gospels. The bad guys here are the Romans. Pilate is a ruthless politician who manipulates Jesus' opponents on the Jewish ruling council, the Sanhedrin. He puts Jesus through a sham trial, pretending he wants to release Jesus. But when he washes his hands, it is a cynical public ploy.

A good side of the Jewish priests is established early on the first night, when Pilate vows to station Roman guards in the temple, the holiest of Jewish sites. The chief priest knelt and bared his neck, declaring that only by wading in their blood will the troops defile their temple. All the priests did likewise. The stunned governor backed down, ordering his troops to leave. (This scene is taken from the famous work of Josephus, his "Antiquities of the Jews," written just a few decades after Jesus' crucifixion.) Their willingness to be martyred gives a more rounded picture of the enemies of Jesus than the one-dimensional villains of most Jesus films.

This is nonetheless a thoroughly spiritual portrait of Jesus. Tonight, in the Garden of Gethsemane, when Satan reappears (looking somewhat like a hit man or a lawyer at leisure in his modern black clothes) to tell Jesus it is not only unnecessary for him to die but that he will be misused throughout the centuries, Jesus is in great spiritual agony. He nonetheless stands firm through Judas' betrayal, Peter's denials, being shunted back and forth between the priests, Pilate, and Herod Antipas, and then the cruel crucifixion. The resurrection is a joyful moment: the risen Christ reappearing to his stunned followers.

There is plenty to criticize in this movie, but then Jesus, both of history and of faith, is such a complex figure that no one film can be fully satisfying. But the "Jesus" that will grace our television screens is worthy to stand with such fine films as "The Gospel According to St. Matthew" and "Jesus of Nazareth." Don't miss it, even if you have to skip out on a meeting (even one at church).