Beliefnet
Flipping through makeup ads in the latest fashion magazines, one might think that millions of teenage girls and twenty-something women had succumbed to an Indus Valley invasion and converted en masse to Hinduism and Buddhism. Cosmetic companies like Cover Girl and The Body Shop have given Far Eastern civ a makeover, using some common, and some rather complex, religious concepts to name products for their spring campaigns. Call it Hindu hip. Call it Middle Path makeup. Call it hot. "Spring's palette is a reincarnated mix of bold color with whole new energy," reads the Cover Girl press release for its "Sheer Karma" collection. Reincarnated is a nice way of saying these colors have been around before, but this time they're "spiritual." The accompanying ads show a young woman with her skin--enlightened?--glowing, but with the same sultry, bored look as any other makeup model. 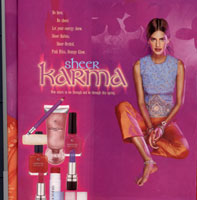 According to spokeswoman Cheryl Hutgins, Cover Girl's campaign has nothing to do with religion. "The campaign was about fun and easy--no religious aspects to it," noted Hutgins, who said she was unaware of karma's religious roots. "The agency [Grey Advertising] presented a few campaigns. [Sheer Karma] best brought to life the essence of the colors. It's really a Far East influence, not religious." That's fine for Sheer Karma, which isn't available in the Far East, where the term's religious meaning would be clear. But in Bali, young Buddhists can walk into The Body Shop and buy the cosmetic chain's "Karma" eyeshadow or "Zen" nail color. At first blush, it may not seem to be a big deal. Since American counterculture discovered Eastern religion and philosophy back in the '60s, words like "karma" and "zen" have lost their punch in the West and have become punch lines. Would Westerners feel comfortable dabbing a little "Kabbalah" behind the ears? Or applying some "Transubstantiation" lipstick? Seems a bit gauche. (And we don't mean rive gauche.) Perfume maker Guerlain, too, might have benefited if they'd consulted an encyclopedia. Ads for the French company's scent "Samsara" might boast the tag line "People who've done others a bad turn get reincarnated. Now you can smell like them." For Hindus and Buddhists, samsara is the endless cycle of death and rebirth that is the root of all suffering. Several cosmetic lines openly advertise their spiritual leanings, but the associations are no less laughable. Shiseido recently introduced its "Energizing Fragrance," which their website says is "inspired by Eastern spiritual thinking" and "brings together a natural blend of sheer flowers and an ancient secret--Eastern spices." (Sounds like those old "ancient Chinese secret" Calgon ads.) Focusing on "vibrational remedies," makeup manufacturer Tony&Tina offers up "seven nail polish bottles with colors corresponding to the human chakra system." The Body Shop admits that their Zen nail color (a reflective gold color) as well as other products dubbed "Harmony" and "Astral" have a quasi-spiritual feel--though the firm says the names have to do more with the millennium than with good old-fashioned religion. Diane Gauld, vice president of merchandise U.S., notes that the colors for the millennium are more reflective and iridescent because the turn of the century has brought around more personal reflection. So should we expect to see ads touting Virgin Mary Night Creme--"It keeps your skin Immaculate"? Maria Hibbets, professor of religions of India at California State Long Beach, says it's not spirituality or reflection that makes the monikers attractive. "It's the exotic East, and therefore one can assign any meaning to these strange terms," says Hibbets, a Beliefnet contributor. "You take a word like "karma" and make it mean whatever you want it to, and it still preserves its exotic nature." Mixing makeup with mystic monikers isn't new. Guerlain introduced its scent Samsara in 1989. And Lancome's Hydra Zen moisturizers have been out for several years. What is new is how the message has been gobbled up by the mainstream. Cover Girl's ads for Sheer Karma are showing up in publications from Teen People to Glamour. "We've seen Eastern influences gradually going mainstream, and teen girls are jumping on the bandwagon," says Richard Leonard of the Zandl Group, which analyzes trends with a youth-market focus. The Body Shop's Gauld says Eastern culture is becoming more popular because it's "not just physically how you look, but internally how you feel . it isn't just what's on the surface but what's really inside." Says Myra Stark, senior vice president and director of knowledge management for Saatchi & Saatchi, "Spirituality is one of the leading trends of the decade, certainly affecting teens and young adults. Nepal is now the destination of choice for those getting out of college." Notes Stark, "This is a trend that isn't going away. It's very, very powerful."

Throw on some lip gloss and meditate on that.