You Are What You Seek 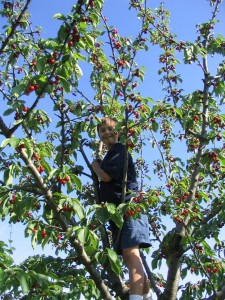 Or, so said Saint Francis.

Rumi, the Sufi poet put it slightly differently, “What you seek is seeking you.”

So, what is the Kingdom? It is not the Church. Not heaven either.

Don’t be.  What the Kingdom actually is…is better than both.

One day, when I was just a child, I learn a Sunday School song. I’d bet many of you reading this could sing it with me, couldn’t you?

“Zacchaeus was a wee little man

And a wee little man was he.

He climbed up in a Sycamore Tree

For Jesus he wanted to see!”

Was seeing Jesus difficult because Zacchaeus was “a wee little man?”  The song says so. I cannot read this story but what I would wish to cast Danny Devito as Zacchaeus, if I were doing a modern rendition of this story.  Perfect, wouldn’t you say?

Interestingly, however, the text itself does not make clear whether the short person was Zacchaeus or Jesus himself.  In fact, the text oddly positions the Greek pronoun “he” so that “he was short in stature” may actually refer to Jesus and not Zacchaeus at all.

Here’s what the text actually says…

“Now a man there named Zacchaeus, who was a chief tax collector and also a wealthy man, was seeking to see who Jesus was; but he could not see him because of the crowd, for he was short in stature” (Luke 19:1ff).

Who was “short in stature?” Was it Zacchaeus? Or, Jesus?

See what I mean? It isn’t so clear.

And, what is that? Or, more accurately, who is that?

They were seeking each other.  You cannot find God inside a building. Or, a book of religion.

Why? Because you cannot find what is not lost.

Who Zacchaeus was seeking to see, Jesus was seeking to find.  In other words, the seeking, no matter who is doing it, is one-and-the-same. Which explains why the longing you feel for God is God.  To put it as succinctly as I know how, you cannot find who you already are.

“Scandalous!” you say. “You are saying you and God are the same!”

Interesting that you would make that charge! It was essentially the same charge another “crowd” brought against Jesus himself who, not coincidentally, said the very same thing. “You are gods.”  Perhaps you should go back and read John 10:34.

If God must be a separate entity to you, then, yes, of course, these words of mine will make you want to take up stones.  If God must be beyond you, bigger than you, it is perfectly fine. I have lived most of my life thinking of God in this very same way. And, to be perfectly honest, I still think of God from time to time as an Eternal Someone who is separate from me. In fact, I have been so conditioned to think of God in this way that it is hard to think of God in any other way.  The same will be true for many of you. Even now, you picture God as this benevolent and bearded grandfatherly-type, wearing a white robe, sitting in a big chair, and on the other side of an eternal door in a place called the “Kingdom.”

In recent years, however, I get this strange and wonderful feeling from time to time that the One I seek and the one doing the seeking are one-and-the-same.  Which explains why Meister Eckhart said, “The eye through which I see God is the same eye through which God sees me.” Which also explains why the religions in the east frequently teach, “I am that…you are that…all this is that…and, that’s all there is.”

Again, Rumi expressed it best: “I have lived on the lip of insanity, wanting to know reasons…knocking on a door. The door opens.  I’ve been knocking from the inside.”

Jesus looked up and into the Sycamore tree and said, “Zacchaeus, you come down for I am going to your house today.”

When the door opens, my friend, and, be assured, the door will open, you will discover what I am just beginning to discover.  You’ve been knocking from the inside.