Sinner’s in the Hands of an Angry God! 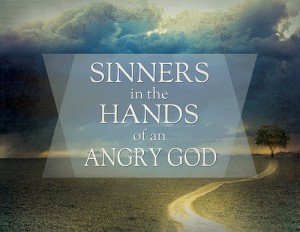 “Sinners in the Hands of an Angry God!”

Yes, that WAS the title of a sermon given by Jonathan Edwards in the 18th century.

The title has changed over the years; the message has remained the same.

You are a sinner.
To be a sinner is bad.
Jesus suffered God’s anger so your sins could be covered.
If you repent, you’ll be saved.
You’ll live in heaven when you die and avoid hell.

In recent years, I have come to see, not so much the fallacy of this theological logic, just its inadequacy. Maybe this kind of believing…maybe this kind of red-faced, perspiration-producing, stroke-inducing preaching from behind Christian pulpits or, worse, on busy street corners…maybe it served some necessary function at one time in our history. Highly debatable, I concede, but maybe, in some twisted way, it was helpful…that’s all I’m saying.

What’s abundantly clear is this: If it ever was, it no longer is.

The word “sin” is rich in meaning. It is, as are many words, a “picture” word, meaning “to miss the mark.” It points to an archer who aims his arrow at a target but he misses or fails to reach it.

The tragedy of the human experience is not that, if you do not get your nasty, sinful, and hell-deserving condition cleaned up…that is, “under the blood,” as it was often described in the days of my youth, you’ll suffer eternal conscious torment in a literal hell one day. And, deservedly so. Because, if you end up in hell, as the preacher’s reminded us, “it isn’t because God sent you there…you sent yourself.” In other words, if you don’t get “saved,” you’ll be eternally lost, damned to hell itself, and both because you elected that destiny for yourself.

Silly, shallow logic but it made sense to the limited minds of my youth. Heck, I used to preach that same stuff myself. I’m embarrassed to admit it today, but I did nonetheless.

As Maya Angelou loves to say, “When you know better, you do better.”

The real human tragedy is actually worse than the way it was preached by Jonathan Edwards…worse than the way many preachers and priests still preach it today. That tragedy is this: that you and I could live our lives…stuck, as it were, in a limited understanding as to why we are here on earth and so never quite figure out the meaning of our lives…that is, never quite get the point of human existence…the point of our own existence. That we might actually “miss the target,” miss THE point of our lives.

I’ve been reading a new book by Fr. Richard Rohr. This guy gets it. And, he states it infinitely better than I ever could that there are two movements to life. In the first half, it’s all about us. The second half is about…or, should be about, getting outside of this “all about me” problem we call “sin” or, the better word today, “ego.” His book, and one I would highly recommend you add to your summer reading list – after, of course, you’ve read The Enoch Factor – 🙂 is entitled, Falling Upward: Spirituality for the Two Halves of Life.

“The most counterintuitive message,” writes Rohr, “in most of the world’s religions, including and most especially in Christianity…is this: that we grow spiritually much more by doing it wrong than by doing it right.”

In other words, to be a sinner is not a bad thing, but a good thing indeed.

How’s that for a radically different way of looking at your “fallen” condition…what Catholics and Evangelicals refer to as “original sin?”

Your condition is not something God hates. Or, that God is seething over and, as a consequence, had to send His innocent Son to be His “bully pulpit” and appease His wrath.

Instead, the recognition of your condition, the acknowledgment of my condition, is first simply the inner awareness that, during the first half of my life, it really was all about me. I was “into” the fulfillment of my own ego needs for recognition, for advancement, for rewards that came in the form of big pay checks, a pregnant retirement account, a name for myself and, not only this, but even my religious life was all about securing for myself an eternal destiny that would, in the end, preserve “ME” in heaven forever. Heck, I worked to even have a few trophies up there.

Second, it is the recognition that, in the second half of life, I am all about dying BEFORE I die…I’m all about living a resurrected…connected…compassionate…and conscious life now. I’m all about the death of the ego now, so that “the power of the resurrection,” about which Saint Paul spoke, becomes more and more a living reality today (Phil. 3:10).

Conversion, salvation, enlightenment…you can call this “SHIFT” in consciousness – which simply means “awareness” or “understanding” – every religions has its own cultural way of explaining what happens when, after missing the point of human existence for much of my life, the shift occurs and, from point onward, you think differently, live differently, view the world differently.  Everything changes. You could not go back if you wanted to. In fact, it would never even occur to you to go back, any more than it occurred to the woman at the well whose life shifted after meeting Jesus (John 4).

You remember the story. She came to Jacob’s Well with bucket in hand to carry water back to her home.  After meeting Jesus…after having experienced a “shift” in her own consciousness, she returned to the city but left her bucket beside the well.

It would no longer be necessary. She carried the “well” back with her…in her.

For me, the shift came one Sunday afternoon several years ago now, while I was reclining on the living room sofa, beer in one hand, remote in the other.

Suddenly, I just woke up.

If you have not yet awakened…or experienced this shift in consciousness, my story will make no sense to you whatsoever. If you have, few things make more sense.

Do not seek this shift.

It isn’t necessary. Life will bring it to you when you are ready. This is what the Bible means by “grace.” Grace and salvation or enlightenment is all about God. Religion is all about the ego…doing it on your own…earning your place in heaven.

The shift will come to you…when you’re ready. Being “Christian”…being “righteous”…or, being “enlightened,” is not something you do. It is something DONE unto you.

If it has not yet occurred, it will. I promise. If you’re concerned about when it’ll come, I’d be inclined to say, it has happened to you already. But you are again allowing the ego in you to do whatever it can to keep you from acknowledging the change…the shift…because, if it can divert you and so get you to continually look for God, it will have succeeded in edging God out – e g o – and, this need not happen to you, my friend.

God is not difficult to find. God is impossible to ignore.

If the shift has occurred in you, then you are nodding your head in agreement with what I’m writing about today. You are saying to yourself, “That’s it! What you describe is what’s happened to me.”

Then, give thanks this day, my friend.

But then, I know you will.

How could you do anything less? 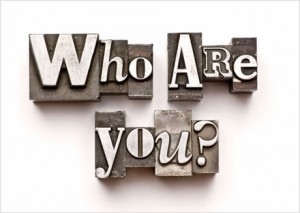 Who Are You?...
archives most recent
More from Beliefnet and our partners
previous posts