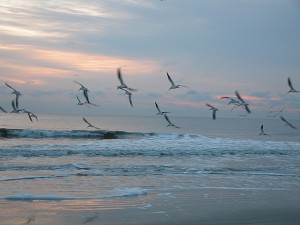 It was Mark Nepo who observed, “Birds learn how to fly, never knowing where flight will take them.”

I have spent the greater part of my life worrying about my destination…where the flight of my life was taking me…instead of giving my attention to this day…and how to fly.

Does it ever seem to you that we’ve missed something important in our western culture? That we seem driven more and more by our imaginary destinations instead of the daily gift of living…of learning to fly.

What did we learn, for example, about the economic crash in the fall of ’08? That there are sometimes more important things than just the bottom line? The dividends earned by shareholders? The profit margins? The “more” we’ve earned this year than we earned last year?

I sometimes wonder if we learned anything at all. Wall Street seems just as intoxicated today, as it was before the crash, by its record high trading volumes.

So, what about you?

More interested in where you’re going than in how you’ll arrive?  Focused more on the destination than on today?

When I think back on my life as a parent, I can see now that I was always reminding my children that what was important in life was their grades…graduations…goals…getting ahead…knowing clearly what they were going to do and then doing it. Being better than everyone else, without of course an attitude about it. That what was important in life is that they learn to win. And, win big!

I try not to be too hard on myself. The fact is, I’ve lived long enough with guilt over the blunders I’ve made of things like parenting. After all, I suppose I just did the best I could, given the fact I had not really learned to fly myself. And, hardly conscious of my awkward attempts at flying. At the time, anyway.

I think it has.

It can become too concerned with a destination (called “eternity”) instead of the daily living of life. Too obsessed with “heaven” tomorrow, which is probably why the Church often makes a “hell” of today.

I do not wish to be too hard on the Church either. After all, the Church is just people and they’re doing the best they can, with the degree of consciousness they have, too. But, I sometimes think our greatest error has been to make Jesus into a Savior whose primary concern is your eternal destination, instead of Savior whose primary interest is in how you live today.

Which probably explains why the Church largely overlooks what Jesus actually taught about life and living. When I look, for example, at what Jesus taught, it seems to me he was far more interested in helping you know how to fly…how to live…than he was in where that flight would take you.

Why? Because Jesus knew, if you ever learned how to fly…how to live…your destination would take care of itself.  Which is why he said, “Look at the birds of the air, my friends.” (Matt. 6:25-34). “They do not plant seeds. Nor do they gather grain into barns.” Jesus saw the wisdom His Father had written into the genetic code of creation itself.

I’ve spent my life gathering grains called investments and IRA’s and such. I missed just walking through the grain fields of life…observing their beauty as they sway to the wind.

And so, without thinking, you, too spin wheels of worry, anxiety, fretting over whether you, or your children, are ready…what others will think…what their teacher will think of them…what you’re accomplishing…what kind of grades they’re getting…whether you’re going to make it…if they will make it?

Want to stop the madness? Then, pause right now and see the madness for what it is.

In fact, hit the “Pause” button every time you think of today’s post. Ask yourself, as you do, “Am I blinded by the destination, I do not see today?”

Let go of tomorrow, my friend. Spread you wings today instead. Let the Winds of Life carry you to their intended destination. Give your attention to just flying. 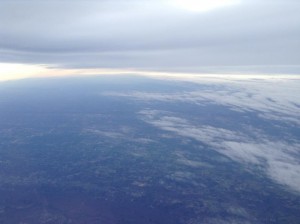 What Is the Breath of Life?
archives most recent
More from Beliefnet and our partners
previous posts