Are you lonesome tonight? Then let’s meet up at the 24-Hour Church of Elvis! 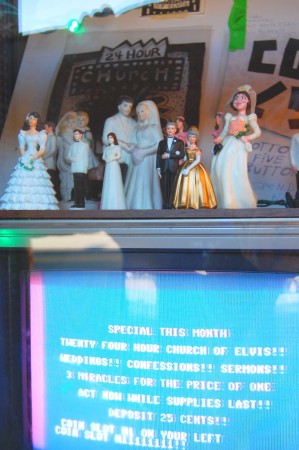 Question: Name one place where you can get married, hear your fortune and gaze admiringly at a spinning kewpie doll any time day or night? Okay, there’s probably a 900 number for that. But how many of those are presided over by the King of Rock and Roll? As far as I know, only the 24-Hour Church of Elvis delivers. With a membership of exactly one, this streetside, coin-operated cathedral of kitsch is possibly the smallest church in the world.

To the thousands of tourists who visit it each year—and to the local residents who guide them to it—this house of worship-slash-vending machine is another oddity in a city of oddities, a star on our freak flag, evidence that, as bumper stickers all over Portland proclaim, we still “Keep Portland Weird.” 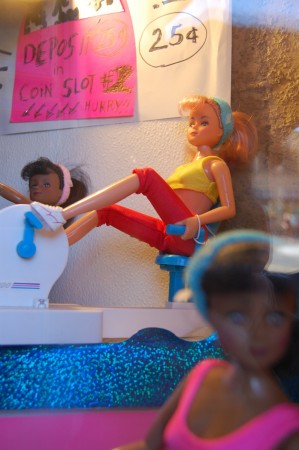 Festooned with bejewelled bobbleheads, glittery gewgaws and dollar store discoveries, this church renders its patron saint almost irrelevant and fans of The King are usually disappointed when they arrive for a pilgrimage. What you can expect, though, is a pop cultural phantasmagoriam of strobe lights, mechanized Barbie dolls, whirring knick-knacks, first-generation CTR computer screens and much, much more. This may not be a real church and its weddings are worth about what they cost ($.25), but that’s not to say it’s without a mission. The Church of Elvis sees itself fighting a mighty battle against the cult of materialism, subverting the dominant paradigm one quarter at a time. It’s an ugly stepchild upsetting the unholy marriage of corporate retailery and some fill-in-the-blank Hollywood demigod. This spinning, buzzing assault on the eyes was cut from the same cloth as David Byrne’s Big White Suit. More or less, the message is Don’t Be Cruel (To the Planet). 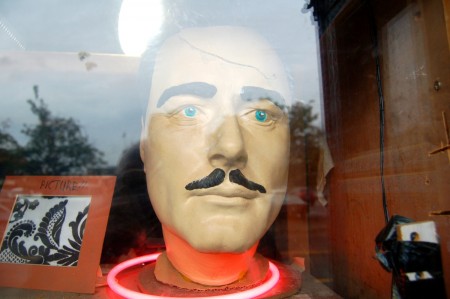 When I discovered the Church of Elvis, back in the mid-1980s, it was situated on a narrow scrap of pavement downtown at 720 SW Ankeny Street, shoehorned between a Thai noodle shop and a skateboard warehouse, catty-corner from the strippers at Mary’s Club. It was the improbable anchor boutique of a gritty urban enclave in a city that has since sanded down those hangnail edges and replaced them with free-trade coffeehouses and designer sneaker stores. (That old location has now been absorbed into a microbrew taphouse.) Today, if you want to find any of that rough-hewn authenticity, it’ll be hanging on the bare factory masonry of a Web designer’s loft apartment. As if seeking the comforting rumble of decaying capitalism, the Church recently relocated to a new spot on 5th and Couch in Old Town. 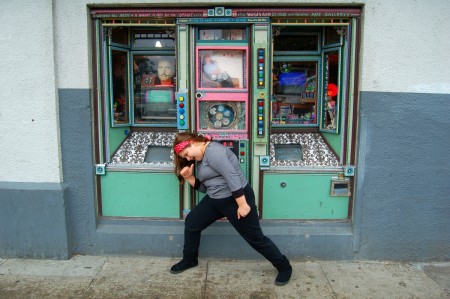 But for a young artist in the 1980s, downtown Portland was a jungle gym. Rent was cheap and local history was plentiful. Anybody with an Exacto knife, access to a copy machine and a mistrust of consumerism could start his or her own ‘zine—and plenty did. Without trying, and without those hopeless bumper stickers prompting them along like stage moms, Portland was weird. If the Weekly World News had any say in the matter, Elvis was alive—sideburns and all—and Bat Boy was afoot. Come to think of it, the whole country was weirder. Into that world the 24-Hour Church of Elvis was born. 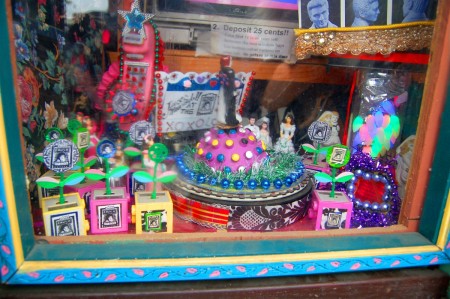 As a good little Jehovah’s Witness, I steered clear of this church-o-mat: Witnesses are instructed on pain of disfellowshipping to stay out of other churches. Not that the irony of the Church was lost on me, of course, it’s just that I was that devout. Such overzealousness was not a problem, however, for my Witness friend Julie B., who not only fed that machine quarters, but actually got several behind-the-scenes tours from its proprietor Stephanie G. Pierce. Miso jealous!

So I was glad to have had an excuse last Sunday to gather together a pocketful of loose change and pay my respects to the Memphis Flash. Besides, this church has the best fundraising policy ever: 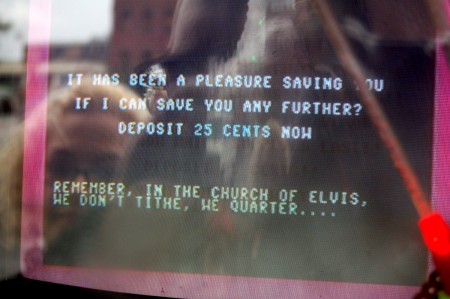 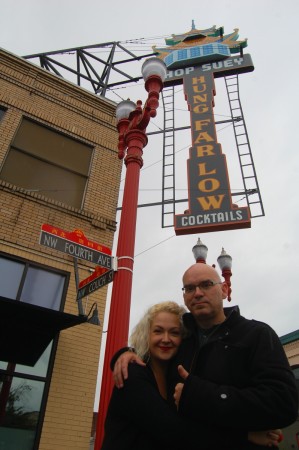 Guess where we are today?
archives most recent
More from Beliefnet and our partners
previous posts