What We Did on August 14 — ADF Druidry: It’s Not Nice to Fool (Around with) Mother Nature

When I was a kid, one of our favorite family camping rituals was the initiation into the Secret Order of the Goose. When night fell, we’d gather around the campfire and with outstretched arms, my stepdad would lead us in the incantation: “Owa… Tagoo… Siam!” And then we’d say it all together: “Owatagoosiam!” Giggles ensued. It started out as a prank, but each year, as we inducted new friends into the Order, it evolved into an actual ritual. A solemn joke.

A good 20 years have passed since I last thought much about that part of our family vacations. It took a Druid ceremony we attended last month to bring those memories flooding back.

Druidism is one of the British Isles’ oldest religious traditions. Little is known about these prehistoric worshipers, except that they might have built Stonehenge and that they revered a pantheon of gods roughly equivalent to those found in Greek and Roman mythology. Eventually, its practitioners died out, though fragments of their beliefs remain in certain holidays and college fraternity initiation rites.

Then, along came the 19th century and renewed fascination with the Wisdom of the Ancients. Thanks to the Madame Blavatsky bump, Neo-Paganism and Druidry still holds a small but loyal following of adherents in its thrall.

The occasion for our walk on the Neo-Pagan side? My old friend, who I will call Sue, who is studying to be a Druid priest according to the Ár nDraíocht Féin (ADF) method, was making a rare visit from Germany. Since we’d also learned that our friends, Sam and Terry and their daughter, Sophie, had just purchased a new house, it seemed like an ideal time for Sue to drop by with a housewarming present in the form of an incantation. Maybe even one that involved the use of booze. She gladly—and gamely—agreed to put us through a ritual or two on behalf of our blog.

Sue arrived with her toolkit of runes, incense, rituals and a yummy bottle of Scotch and announced that we would celebrate a mini-harvest festival in honor of the Celtic god Lugh (a.k.a. Hermes, a.k.a. Mercury), whose official celebration was to take place a few days later.

As we approached the blazing fire pit dug into Sam and Terry’s back yard, she led us in song:

We approach the sacred grove

With hearts and minds and flesh and bone

Join us now in ways of old

We have come home

(Yep, you read that right: not a single whole rhyme in the entire verse.)

After that, we pronounced a “consecration of space” upon the realm below the earth (symbolized by a pail of water); the earthly realm (symbolized by a tree) and the realm of spirits (symbolized by the fire). This involved sprinkling vegetable oil, bird seed, water, Scotch and a few other staples of antediluvian life onto the various symbols as offerings. Sam tossed a handful of myrrh in the fire for a fragrant whiff of Judaeo-Christianity. How he happened to own five dry gallons of myrrh is another story for another blog post. 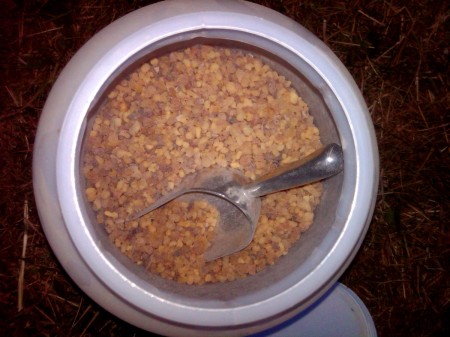 And then Sue offered a blessing on their home. Pulling a few Scrabble tile-like runes from a bag, she was heartened to see that the Gods had blessed their home with nothing but glad tidings. Evidently, the Gods can get rather prickly; their blessings can leave one with a “gee, thanks for nothing” kind of feeling. Sue, however, observed that after so many centuries of neglect, the Gods are grateful for any attention we give them.

Sue is a dear old friend of mine. I will always love her and having seen her get kicked around by a highly paternalistic, fundamentalist religious tradition, it warms me to see that she’s now part of a community that that respects her personhood. Yet I have to admit that Druidry… well… doesn’t ring my religious bell. I’m a little unclear where Sue stands on the subject, but many of its adherents believe literally in the existence of ancient gods and magic and that splashing a cup of perfectly good booze over a barbecue will transport you out of the space-time continuum. It demands a suspension of disbelief that I can’t quite muster.

If believing that an ancient Celtic god can bring prosperity to your home helps you focus positive energy around that outcome, then knock yourself out. But keep in mind that there is a difference between belief and reality—and that it’s human nature to confuse the two. The way I see it, beliefs are like stepping stones that can be used to take us closer to Reality or The Truth. But when we mistake them for the thing-in-itself, we stop moving on to the next stepping stone. We stop being truth-seekers and risk becoming truth-owners—the most egotistical conceit of all. I’m speaking from experience. As a Christian, I believed that Christ’s death actually redeemed me from sin. As long as I took those beliefs (in the ransom and in the Christian concept of sin) literally, I remained stuck in a cultish religion that viewed others’ spiritual paths with disdain. Letting go of those beliefs allowed me to move forward and join the human race. Ironically, I now doubt that Jesus as we know him ever existed, but I appreciate his teachings and the symbolic meaning of his sacrifice more than I ever did as a Jehovah’s Witness.

I can see lots of value in participating in Neo-Paganism as metaphor. Whatever meaning the spiritual triad of earth, water and fire once offered to an extinct race of people, what seems to endure is their symbolic appeal. They had their gods that don’t exist, we’ve got our movie stars who do. Which civilization is worse off? We wonder at the same moon that the ancient Celts did, but we’ve also spun dune buggies around its craters, and that experience completely changes not only our perceptions of it, but our dreams. You can never step into the same Sea of Tranquility twice.

Humans are creatures of ritual, and if that’s what it takes to be more mindful of the world around us, then I’m all for it. But it’s a means to an end.

Sure, Druidry and Neo-Paganism promote harmony with nature and the environment, and I’m the first to say We Need More of That. But the ancient Druids participated in their environment in a very different way. For instance, ritual human sacrifice was viewed as a great way to ensure their security. By rejecting such barbarism, ADFers stay out of legal trouble and acknowledge that maybe we’ve learned a thing or two in the intervening millennia. Unfortunately, it also means they’ve transplanted selected forms of worship to the 21st century while leaving much of the substance behind. What you’re left with is a lot of pretending.

Almost every church smudges the line between religious ritual and role playing game. Seriously, what’s the difference between Catholic Mass and a Renaissance Faire when it comes to playing dress-up, chugging wine from a tin goblet and eating magic biscuits? It’s all make-believe and in no way does recognizing it as such take away any fun. At least, at church, we get to peek behind the curtain and, released from superstition, enjoy Communion on its own terms. Belief in the literal transubstantiation was always a distraction anyway, because how can you commune with God while worrying that you might be impiously masticating His body? By seeing Mass as metaphor, we get to enjoy the sacraments as symbols of something far greater than a quasi-cannibalistic ritual.

Druidry, on the other hand, encourages its followers to actually resurrect the old Gods, confusing that was then with this is now. I can’t go there. All I can do is wonder, Who would want to do that? And why? In the meantime, the best I can do is try to control my giggling. Who knows? Maybe, like the universe itself, that’s how ancient Druidry got its start in the first place: as a solemn joke told around an ancient fire.