What I Did August 7: The Quakers — Not Just for Breakfast Anymore

You know them as Quakers. They know themselves as Friends, or, officially, as the Religious Society of Friends. If you vote Democrat, raise chickens but don’t eat them, wear Jesus sandals and own a first edition of the Moosewood Cookbook stained with the vital fluids of homegrown tomatoes, you might qualify to be a Friend. If, on the other hand, you vote Republican, shop at Nordstrom’s and love the texture of veal, you wouldn’t exactly be unwelcome at a Friends meeting, but it’s unlikely that you’d penetrate their ranks beyond the outer circle of of Mere Acquaintance.

We’d been looking forward to the Quakers for a long time. Amanda, in particular, felt drawn to their reverence for silence: probably 95% of their hour-and-a-half meeting time is spent in silence as members sit and wait for the Spirit to flick the Bic of their Inward Light, moving them to speak. If such a visitation ever befalls you, you’ll know it because you’ll suddenly find yourself standing up to speak on behalf of the principles of Truth, Peace, Equality, Community and Simplicity. Or, if that well runs dry, as a fallback topic the Eternal Spirit might prompt you to talk about the evils of capital punishment. At least, that’s what we heard a lot about on the day we attended. If the Eternal Spirit ever discovers talk radio, Quakerism as we know it is doomed.

While silence (punctuated with brief bursts of Spirit-led testimonial) can be golden, I felt as out of place at the Friends’ meeting as any of the more fundamentalist churches we’ve attended. The service felt as programmed as an AA meeting: in spite of all the correctly humble, sober comments, I sensed that if I said what the Spirit was leading me to say—such as, just to be provocative, to present an argument for capital punishment—I would be met with silence both during and after the program. They left a funny taste in my mouth. If I return to the Quakers, it will be with a cup of brown sugar and raisins. 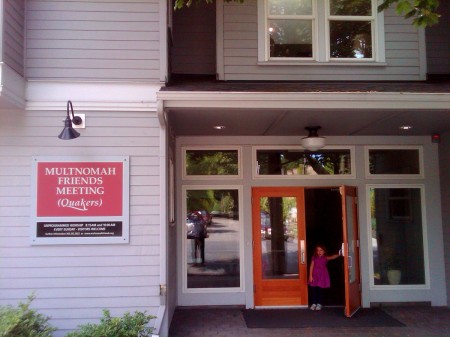