Attention shoppers! Looking for a helluva church at heavenly prices? 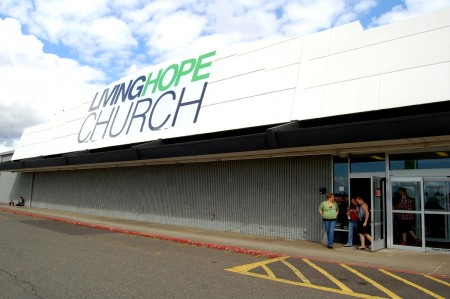 “Where are we going for church?”

“Is it Sunday already?”

“’Fraid so, babe. Get up. Have some coffee and an Emergen-C.”

“God…. Ow…. Why am I wearing your bra? How about the Hare Krishnas? No wait. Let’s go to the 24-Hour Church of Elvis. It’ll take 15 minutes and we can grab a bowl of Pho afterwards. Turn off that damn light.”

“Ooh! How about Living Hope Church?”

“You’ll hate it. It’s a megachurch. They’ve taken over a vacant KMart in deep Vancouver.”

If you’re a regular here, you know how much I loathe megachurches. The kind that take “community” and turn it into “scene.” Whose bands feature tattooed leader singers with Supercuts hair and Jesusgasm faces. Where your donation dollars arrive at a school fund in Zimbabwe only after first being filtered through the jaundiced liver of a swollen marketing budget. With my Bic ballpoint set to stun, we headed off for Living Hope Church in Vancouver, Washington.

And, yup, they really do occupy space in a former strip mall KMart store — which seems like an odd place to hang with the Lord. Where exactly would He be? At His age, I’m guessing aisle 3, browsing the adult diapers. Of course, He has been known to work in mysterious ways. Maybe it’s no coincidence that KMart’s 2003 ad jingle was inspired by, ahem, a Jesus Jones song. (Hey… are you thinking what I’m thinking? Here’s Living Hope’s new slogan: Salvation. Right here. Right now.)

We couldn’t wait to get there. Maybe if we timed it right, we’d catch a blue light special on grace or maybe even receive communion from Rosie O’Donnell and Penny Marshall. But, as we slipped through the automatic sliding doors, we saw immediately that the Living Hopists do things a bit differently.

At first, I wasn’t sure if we’d walked into a plant sale or into the wrong storefront altogether. Flagging down a heavy-set man dressed in a red t-shirt that advertised his cred as a Harley-riding Christian I asked for an explanation.

“It’s neither,” he said. “Every couple of months or so we do a different theme for our ministry. This month it’s “Greenhouse: How Faith Grows.”

Past themes have covered such topics as Pirates, Castles, Hollywood and a riff on the TV series Lost. Kinda cute. Kinda dorky. Totally Vancouver. I liked it.

And then we entered a dimly-lit main auditorium strewn with enough stackable plastic chairs to chap the hides of about 1,000 people. There was the obligatory megachurch band throbbing out a medley of smooth-as-pewter Christian rock. A woman walked by in a T-shirt that echoed those souvenirs from New York: “I ♥ JC”. 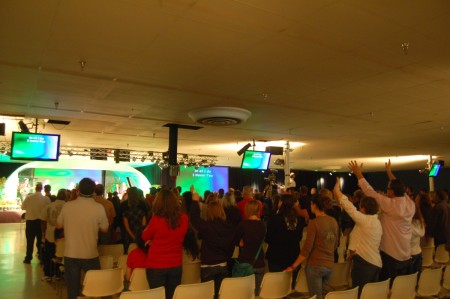 Just to drive the point home, even the stage had been re-envisioned as a greenhouse: 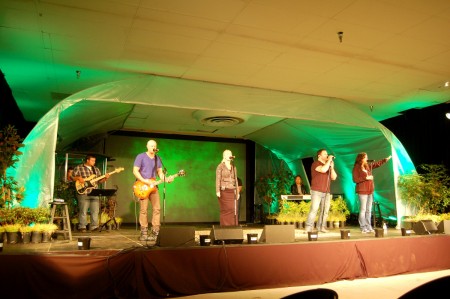 I looked at Amanda. Amanda looked at me. “Yeah, baby,” I said. “That’s what I’m talking about.” Maybe it was that the merchandising ghosts of KMart still lingered, or it was the hastily-installed IKEA draperies or the thrift store furniture that cluttered the youth ministry area, but I got a different vibe from this church than I usually get from megachurches. Living Hope is going through something of a renaissance. An appealingly downwardly mobile one.

The church, which has been around for about 15 years, once occupied property in an upscale Vancouver suburb. Upon outgrowing that church, in 2010, they decided to move into a poorer section of the city, first taking over a former Mervyn’s space at Vancouver Mall. That deal, however, went south when Cinetopia Theater made a bid to purchase the property, bringing their month-to-month lease to an abrupt end. Living Hope’s sojourn in the dodgy Vancouver real estate wilderness has lasted so long that when they got the opportunity to purchase the former KMart for $5 million, its senior pastor, John Bishop, lunged at the chance. With only a small down payment in hand (their other properties remain unsold), he called upon his 8,000 members to make up the difference. If there was ever a time to say that someone took off on a wing and a prayer, this would be it.

The people of Living Hope came up with a variety of novel plans to finance the operation. One man donated his motorcycle: 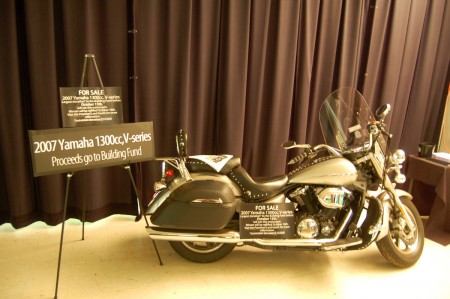 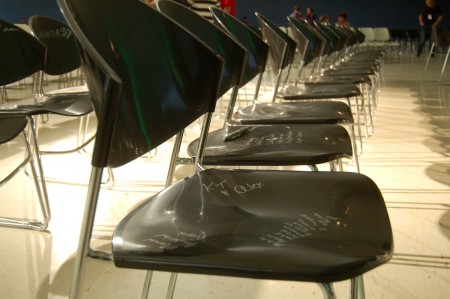 And personalize them as you see fit (click to enlarge): 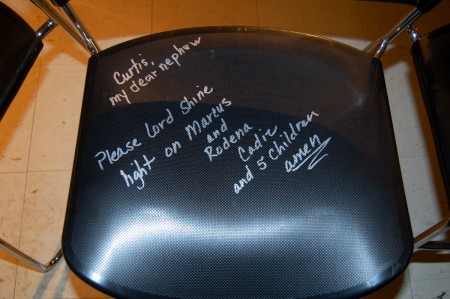 You can read more about that initiative in this snazzy brochure: 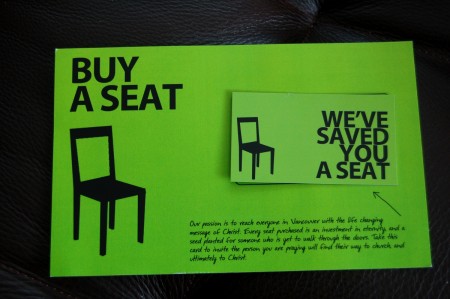 A substantial portion of their financing derives from an innovative program that allows members to loan their retirement savings to the church at 5% annual interest, on a 5-year term. Notice that we’re talking loans here, not donations: this flock isn’t being fleeced—not that the church wouldn’t accept fleece as a donation. The money is transferred from 401(k) and IRA accounts, funds that members shouldn’t be frittering away in any case. The only risk is that the church will default on these loans, but at the rate it’s growing, that seems unlikely.

The day we attended, head pastor Bishop was out sick, and so we were treated to a sermon by Pastor Gary Holde. The theme was on the topic of words that can hurt or help.

“Sticks and stones can break your bones, but words will never hurt me,” he said, following up with, “How many of you know that’s one of the biggest lies we have?”

Holde went on to describe the ways that words can inflict deep wounds. Of course, he talked about thoughtlessness, sarcasm and harsh criticism. And then he held his own feet to the fire, making a rather humble observation:

“It’s an incredible honor to be a pastor, but it’s also important that I use my words carefully because along with the title sometimes comes a respect that maybe isn’t deserved or earned. And [some] have a tendency to say things like, ‘Well, my pastor said such-and-such.’ We [pastors] need to be careful.”

Hemingway once said that writing is easy. “All you do is sit down at a typewriter and open a vein.” Seems to me that Holde follows that advice when preparing his own sermons.

Regarding the need to avoid negative self-talk, he admitted, “If someone else talked to me the way I talk to myself, I wouldn’t have that person as a friend.”

Basic church stuff. But after visiting several megachurches and detecting a common agenda to (a) stick their hands into their members’ wallets and (b) shame them into submitting to church authority, often using a legalistic interpretation of Bible morality, Living Hope struck me as refreshingly different, with a mission to love, not judge. Most churches promise this, but few deliver.

As April, one of Living Hope’s day care providers explained, “We live in a temporary world. Our lives, this church—it’s all temporary. Our job is just to make life a little easier for each other.” In practical terms, this means that, even if you’re a gay, evolutionist, Star-Bellied Sneetch, there’s a seat for you at Living Hope church. Whether you pay for it or not.

To be sure, Pastor Bishop has been hitting his church hard to cough up the love for this real estate deal. But there are extenuating circumstances—like, you know, the urban equivalent of a barn-raising. In a recent article in the Vancouver daily Columbian, he winced, “If I was in a church where I’d been asked for money for nine months straight, I don’t know how I’d feel about that.”

Several times during his sermon, Holde expressed his desire that his church avoid becoming religion-as-usual. Noting that as churches grow, they can tend to lose sight of their mission to provide a loving, inclusive community for their members, he declared that if that were to happen at Living Hope, he would leave and join another church.

Only time will tell whether this scrappy congregation can avoid that pitfall. For now, however, it seems to be galvanized around the effort to reach its financial goal by October 20, by which time Living Hope will need to have raised the final $500,000 necessary to complete the purchase. I wonder if it’s occurred to them to try a plant sale?