Our first trip to the World Buddhist Preaching Association took place at noon on a Tuesday. Joel and I had just finished a gut-wrenching therapy session together, the kind that leaves you feeling exhausted, hungry, vulnerable and more in love than you ever imagined you could be. We filled up on pizza afterward and then Joel remembered a Buddhist Temple he thought was within walking distance, so we headed down Hawthorne Blvd hand-in-hand to see if we could fill up on zen as well.

The temple, camouflaged in one of the city’s most eclectic neighborhoods, was only a few blocks away and turned out to be a gem – an odd mix of extravagant architecture and impoverished dilapidation. Much like parts of Portland, Oregon itself. 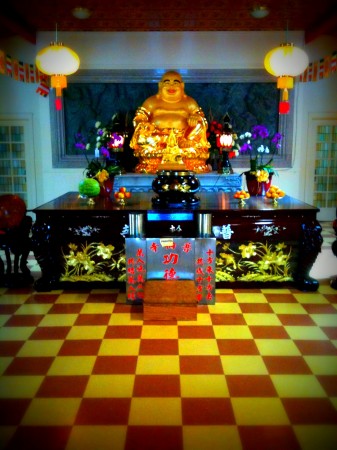 Walking around, it reminded of the Vietnamese nail salon in East San Jose where I used to go for cheap pedicures during college. It was almost as if those ladies opened up a Buddhist Temple. There were enormous gold-dipped statues, sure, but they were flanked by walls with peeling paint and cubbies filled with broken kitchen appliances and mismatched cookware. None of the bathroom stalls had functioning locks and the hand-soap dispensers were filled with diluted Dawn dish liquid.

Fortunately, it was empty except for the two of us. In fact, the only other soul we saw that afternoon was an ancient Chinese woman with bad knees who didn’t even speak enough English to answer the phone. After a tour of the garden, which included some of the most beautiful koi fish I’ve ever seen, we took off our shoes and entered the sanctuary proper. 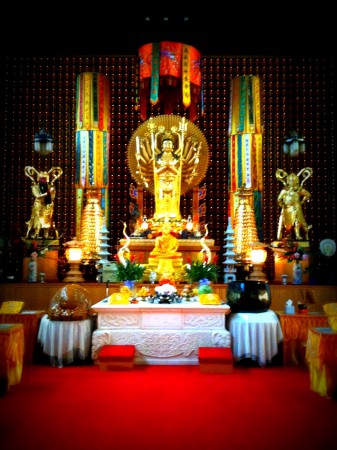 Again, the dichotomy was magical. Red carpet, gold Buddhas, thousands of candles lighting the scene all illuminated by stained, mismatched ceiling tiles. They’d also apparently installed the HVAC unit several decades after the temple itself was built and it sat off to the side of the stage like a rickety white  elephant in an otherwise sumptuous setting.

Even the tables were overflowing with offerings for Buddha – perfectly stacked plates of mangoes, tangerines and kiwis – all with the price stickers still attached. My favorite offering was an unopened two pound bag of pistachios from Costco, Kirkland brand and everything. It reminded me – on a day that I was especially receptive to the reminder – that beauty is more easily found in flaws than in perfection.

We decided to come back the following Tuesday for their meditation service.

Of course, when we showed up a week later at 7:30, we arrived to find the doors closed. 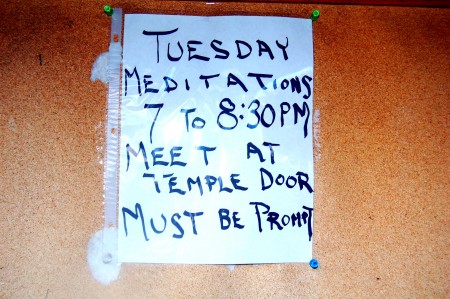 We’d remembered the time incorrectly. I’d actually tried to find the temple online (no website) and also to contact them by phone (no answer) so we were a little annoyed to have driven all the way there for nothing. I guess we should have been more MINDFUL of the time.

Again, we decided to come back the following Tuesday…

Of course that meant we had to bring all three of our children, which was not part of the original plan, obviously, but we’ve never been to a service that didn’t welcome children, so we figured what the hell? Why not? Maybe the gremlins will embrace the silence too.

When we finally got to the temple – at the correct time on the correct day – it was the end of my first day with the kids in over a week and I’ll be honest, I was in a foul mood. Joel and I had spent most of the previous weekend childless, either in bed together or watching fireworks at the Waterfront Blues Festival, which had felt a bit like a honeymoon for us. Of course by the time a week has gone by without my kids, I always miss them in a visceral way, in my bones. But they are always a challenge on transition days. Always. They like to test us just to see if any of the rules have changed during the week they’ve been with their father. So that’s where we were when we arrived at the Buddhist temple – at the end of a long, loud and painful transition day.

All day I had been simultaneously dreading the idea of having to keep my kids quiet for the service and at the same time, highly anticipating that silence. Mostly I was hoping that the service, whatever it turned out to be, would give me perspective and lighten my mood so that instead of feeling put upon by my kids, I could open myself up to being there for them. I wanted to stop feeling burdened and start feeling connected. No small request to make of any religious service, but still, that’s what I was looking for when we were greeted by our not-so-friendly Buddhist host, Pra Sandy.

The monk from hell.

This monk! Seriously, people. We immediately started coming up with names for him. Pra Drill Sergeant! Pra A-hole! Pra Meanie! Pra Butthead! We’d never met anyone like him!

I had to leave for a moment to take my daughter to the restroom and when I returned five minutes later, Joel was in the process of defending our children’s honor. Apparently, Pra Sandy had informed him, not so subtly, that children – particularly OUR children – would not be welcome at the meditation service that evening. Joel was attempting to reassure him that our children would be FINE. That they were experienced church-goers who had no trouble sitting still or keeping quiet. The sign posted on the front doors of the temple hadn’t said a word about children not being welcome or that you had to be an advanced student to be included. This is, after all, a public building, a tax-exempt church, and while they have every right to their quiet time, they have an obligation to the community to make those times and requirements clear.

“Have you ever meditated before?” Pra Douchebag asked.

“Well it is going to be very painful, even for just five minutes.”

“Your children can’t sit still for even five minutes. Let’s do a three minute test. I’ll show you.” Pra Jerkface moved around some plastic chairs, “To make it easier for them. Since there’s no way they’ll be able to sit still on the bench.”

Then we received a lecture about “unwholesome states.”

“What are unwholesome states?” I asked. Because that’s what I do when I want to learn. I ask questions. All of which seemed to annoy our zen-master Pra Whatshisname.

He rolled his eyes at me. “I’m showing you,” he insisted and he illustrated what our slump-shouldered, soft-backed, UNWHOLESOME posture looked like.

Apparently, we don’t have “attention for essential parts of our bodies,” which makes us “unwholesome.”

I’d like to point out that it’s been WAY TOO MANY decades since Pra ObviouslyCelibate used the “unwholesome” parts of his body in the ways they were meant to be used. It’s the only thing that could explain his nasty attitude.

“Do you understand?” He kept asking. “You didn’t understand.”

[Too afraid of the drill sergeant to speak…] (Kids.)

So he put us through our three minute test. The kids lined up in their white plastic patio chairs and Joel and I sat up straight on the bench. Liza asked if she could use her birthday camera to take pictures and he said, “No! Taking pictures distracts our minds!”

All of us tried to breathe deeply “from our lower backs” and the thing is, our children were ANGELS. They sat perfectly still and the silence was as loud as a monk’s fart. I was exceptionally proud.

But apparently Pra Soup Nazi had made his point. We failed his test by not sitting straight enough or breathing deeply enough.

NO MEDITATION FOR YOU!

All I could think was, what about the Buddha himself? Is he breathing in and out of his lower back? Does he even HAVE a lower back? And more importantly, how do Buddhist KIDS learn to meditate? It certainly can’t be because they get turned away from the temple doors.

“Apparently we’re out of our league,” I admitted.

Unfortunately this meant we had to go our separate ways.

On our way out, we stopped for some pictures on the front steps of the temple and Pra Sandy came back outside one last time to post a sign saying that the temple would be closed to latecomers. We all thought he was going to shoo us off his front porch, but all he did was give us another excuse.

“I’m not the first monk to turn away children. It happens all the time.”

If the Noble Eightfold Path of Buddhism calls for “Right Speech,” then this would have been the right time to USE IT. Another good time for Right Speech would be to post a freaking sign. 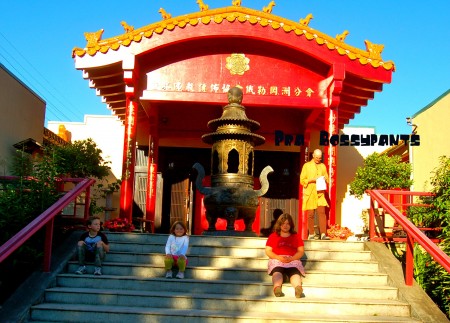 Ironically enough, I’d gone in there hoping to lighten my load and feel close to my children again and while there wasn’t much silence, I ended up getting EXACTLY what I needed that evening. On the drive home, the five of us bonded over our mutual outrage at the situation, at the meanness of the monk, at how silly it was that we couldn’t take pictures of the fish, at how the third time was, in fact, not at all charmed. We ended up laughing about Pra Buttface all the way home.

If there is beauty to be seen in flaws, we found it in spades.