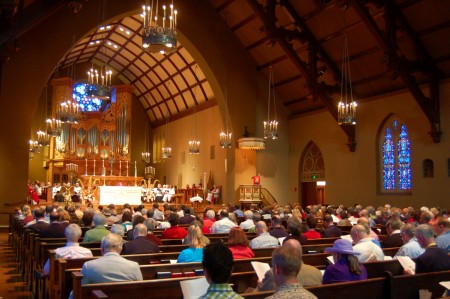 “What’s a nice atheist like you doing in a church like this?” That, more or less, is the reaction we get from many religious leaders when we show up on their doorstep on Sundays. At least, that’s what they seem to be thinking. Too often, I ask myself the same question. Last Sunday, we attended the Pentecost celebration at Trinity Episcopal Cathedral and I got an answer. (Alert readers might recall the Taize Service we attended there a few weeks ago.)

Though I don’t believe in God, Sasquatch or the Oregon Lottery as an investment tool, I do search for meaning and values. I’m fascinated with ethics and philosophy. When church is done right and those ideals are present, God can be an afterthought — which is as it should be. A good sermon should have enough meaning and substance that you can take any references to God out and it will still have the power to change your life. (By contrast, I would say that churches that use the authority of God to keep their members obedient are, by definition, evil. Not that I’m pointing any fingers *cough* City Bible Church’s Pastor Frank Demazio *cough*.)

So! You can imagine my pleasant surprise at Trinity Episcopal last Sunday. We attended that service because we heard it would feature a beautiful choir (the rumors proved to be true) along with a first-rate performance on an amazing pipe organ (it was and it is). What we didn’t expect was a delightful sermon that expanded the way I look at the world just a little bit.

Pentecost is a Christian celebration that takes place 50 days after Easter. Easter, of course, celebrates the day Jesus was raised from the dead—a notion that, to me, is about as believable as the idea that once a year magic bunnies sneak into my house to bring me sugar covered marshmallows. On that first Christian Pentecost, Jesus’ followers had gathered in some unnamed person’s walk-up apartment to pray and fast. When a stiff breeze whooshed through the room, everyone began reciting the next day’s closing figures on the Tokyo Stock Exchange. Hallelujah! Christianity as a religion was born! Jesus was not only raised from the dead, but he came back with a Santa Claus bag filled with gifts of the spirit. Some received the gift of prophesying while others were endowed with the ability to instantly speak a foreign language. The less fortunate received gifts like improved handwriting, awesome checkbook balancing skills and the ability to fry an egg without breaking its yoke.

According to the day’s speaker, Reverend Marianne “I’m not a cult leader” Borg, Pentecost is in some ways a more important celebration than Easter. She maintains that this is the real celebration of Christ’s return. “I used to think Jesus became available on Easter,” she said adding, “Maybe that’s true. But I believe it took time to understand what had happened” regarding their Lord’s death and resurrection. It took longer than three days to absorb the impact of Jesus’ death. “Pentecost gives us that time. This tradition understands that it takes time to grieve. The death of a spouse, or the loss of a way of life, a dream, an image of yourself all take time to comprehend.”

The Reverend Borg (creepy, innit?) went on to explain that 40 days after his death and resurrection, Jesus returned to heaven. 10 days after that, he returned to earth to dole out scoops of Holy Ghost to the gathered faithful. In the Bible, 40 days are considered, symbolically speaking, a long time. (See Noah’s flood, which lasted 40 days and 40 nights.) 10 is a symbol of completeness. So the 50 days leading up to Pentecost were a long time; that is, a sufficient amount of time to make some sense out of all the craziness they’d just endured. Thus, according to Reverend Borg, Pentecost is an acknowledgment that before we are ready and able to pick up and move on, we need to take time. Pentecost is about taking time and about renewal. “It celebrates newness.”

I like that sentiment. In my own life, I need to remember to allow time to heal or regain strength or find clarity. It’s easy to slam a five-hour energy drink and keep going—and sometimes that’s what’s needed. But mostly I need to take sufficient time with my decisions so that I can move forward with intention, not rash action. That’s a lesson of Pentecost I can buy into.

Reverend Borg (God, I love saying that!) also talked about the meaning of prayer. I used to pray every day, privately, representing the family at mealtimes and on behalf of crowds at church. I know, right? What a chore it became as I continually had to come up with interesting things to pray about or risk repeating myself. After leaving the Jehovah’s Witnesses, you can’t imagine the release I felt, knowing that I didn’t have to go through that rigmarole any more.

Then again, maybe I never stopped praying. Speaking of how we put our intentions out through prayer, Borg said, “Prayers are like sails that are raised up and carry us to new possibilities.” Here are a few prayer traditions from around the world:

The common thread in all of these forms of prayer is that they affirm a person’s intentions. They assume that you can reach out to—and be heard by—someone or something greater than yourself. Even atheists can pray. Alcoholics Anonymous members who don’t believe in God recite the Serenity Prayer, directing it to a plastic “sobriety chip.” If those drunks can do it so can I.

Forgive me for my irreverence (if you’ve dropped by this blog before, I guess that’s a moot point) but I’d like to imagine for a moment that even our skanky little Year of Sundays ritual could be compared to a prayer offered snarkily, but with regularity, by a pair of skeptical souls. Sometimes it’s a fierce prayer of rebuke calling preachers out for their phoniness; at other times it’s prayer of tribute and respect. Sometimes it’s a prayer of mockery and laughter. When we dig deep, speak the truth with as much courage and humility as we can, double check our work and press the “publish” button, sending our thoughts into the tubal Internet grid, who’s to say we aren’t talking to God? Prove to me I’m not. If you can reach Him, Her, It or Them through through the interface of a crucifix, I think I can probably get there with an IP address too. If God is who He/She/It/We/They claim to be, a lack of faith won’t stop Him/Her/It/Us/Them from listening.

Of course, I have to do my part. For instance, I’m willing to wait to hear an answer back. 50 days should be enough time. After that, I’m outta here to hit the bars and strip clubs.