Like the old Levy’s rye bread commercial said, “You don’t have to be Jewish to love Larry”.  Okay, they said “to love Levy’s”, but you get the point.  And it’s true, that you don’t need to be Jewish to love either, but in the case of the Larry David Show, whose eighth season on HBO premiered on the 10th, it might help.

As Eitan Kensky points out in his Forward article, Larry David creates a Jewish universe on his show.  Unlike Kensky though, I see nothing defiant about it, and that too is an important part of the story — Jewish is distinct but not defiantly so.  It is clearly demarcated as its own thing, but also seen as totally normal and capable of transcending its own boundaries without fear of dilution or diminution.  In that regard, Larry David, whether consciously or not, charts a course for the future of Jews and Judaism in America.

Whether Jews are ready for Larry David’s Universe or not, I don’t know.  I suspect not, and am not even sure that I am fully ready for it myself.  On the other hand, the show works, it works for millions of people, most of whom are not, I imagine, Jewish.  All of that, points to the fact that like Levy’s, it may all work out quite well.  Stay tuned. 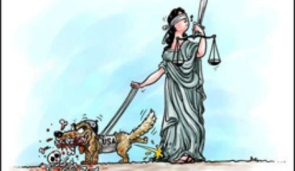 Hateful Cartoon by UN Rep. is Tragic but Not Surprising
archives most recent
More from Beliefnet and our partners
previous posts