In honor of Tu b’Shevat, the 15th day of the Hebrew month of Shevat which coincides this year with January 20th, and is often called the Jewish Arbor day, Congregation Dor Hadash in San Diego California will hold a Blessing of the Animals ceremony. 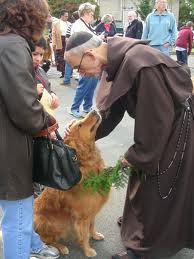 Pet owners are invited to bring their pets to the Reconstructionist synagogue by noon Sunday, Jan. 9, where they will be blessed by Rabbi Yael Ridburg. Furred, winged and swimming creatures are all welcome — from cats to turtles.
According to the San Diego Union-Tribune, last year’s blessing ceremony included the audience responding: “May they never suffer from Ick, and may their fins and scales always sparkle in the light of your sunshine.”

And before people start scratching their heads, wondering where this came from, let’s be clear: this custom is not some recently-concocted attempt to be relevant, itself not a bad thing, but often a charge made by those suspicious of innovation. In fact, the Blessing of the Animals is a centuries-old tradition dating back to the time of St. Francis of Assisi, animal-loving Saint in the Catholic Church.
Of course, appreciating its roots may make some Jews even more uncomfortable than they would have been with something we made up on our own. But is anything really made up on its own?
All traditions, even those as old as the laws found in the Torah, are rooted in some larger cultural context. Think about everything from animal sacrifice to the tzitzit, the ritual fringes worn by many on their talitot (prayer shawls) and some on a kind of fringed ritual undershirt. The former was the dominant mode of all idolatrous worship in biblical antiquity, and the latter was a Jewish adaptation of the clothing worn by the priests of Egypt.
Having been to many Blessing of the Animals ceremonies at New York’s Cathedral of St. John the Divine, and loving each one, I think Dor Hadash and its rabbi are to be congratulated for continuing the ancient tradition of sacred adaptation. My only regret is that I will not be in San Diego on the 20th!