Thousands of Ultra-Orthodox Jews Rally in Support of Racism

Tens of Thousands of Ultra-Orthodox Jews (Hareidim) rallied in both Jerusalem and B’nei B’rak to assure that the schools they attend would continue to segregate students along racial-ethnic lines. It’s hard to know where to begin a response to this ugly and tragic situation. 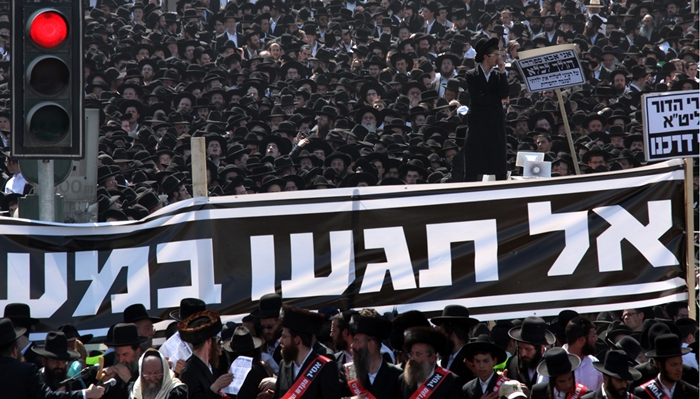 Perhaps the response lies in noting that with all of the challenges faced by Israel and the Jewish people around the word – admittedly few than past generations, but still real nonetheless, this community mobilized more forcefully around keeping apart Jewish kids whose ancestors came from different countries, than around any cause for which they have come out in years. I guess racism is a central tenet of contemporary Hareidi belief. Sad. And also frightening.
The response demonstrates that more than concern about the safety of Jews around the world, the security of Israel’s borders, or even the crushing poverty in much of their own community, what these people want is racial and ethnic purity. How tragically ironic given that most of their ancestors came to Israel to escape the handiwork of others who wanted the exact same thing!
Of course, I am not calling the Haredim who protested today, Nazis. But it does help explain why they often use that word to describe those with whom they have political and religious disagreements, from women who want to pray while wearing a talit (prayer shawl) at Jerusalem’s Western Wall, to police who keep them from assaulting those women, etc.

To be sure, there are myriad challenges with Israeli public schools which are divided between Arab and Jewish (itself and oxymoron since Jews from Arab lands are no less “Arab” than Muslims and Christians from the same places), so-called religious and non-religious, etc. But unlike these other schools, which students from communities outside the stated target population can and do attend, the Hareidi community wants an enforced ban ala’ George Wallace standing in the schoolhouse doors.
On top of that, they demand public dollars for schools that operate in contravention of the law. If that isn’t; the definition of chutzpah, I don’t know what is.
Bottom line, if these schools do not integrate, they should be closed. And closing them would be a mitzvah. Once they are closed though, the people of Israel better get to the bottom of two fundamental questions.
First, what are the fears and angers that could motivate this kind of racist rage among an entire population? And second, when will Israeli schools begin to insist that the primary social obligation of any school is to produce responsible citizens, not pander to a narrow set of religious or non-religious needs?
Failing to address these questions are far bigger threats to Israel’s survival than most of the stuff which grabs headlines and is often out of our control anyway. Who knows, perhaps that’s why we often prefer to focus on those issues – with little to be done about them, we need not actually solve them. Like I said, sad.