Due out next month, world renowned cartoonist R. Crumb, will share his take on the first book of the Bible. That Crumb, who gave us the famously X-rated Fritz the Cat, now applies his talents to Genesis is cause for everything from alarm to joy.
For some, the very idea that the Bible is offered up as a cartoon demeans the text and its sanctity. But to me, cartoons are simply one more way to depict the most powerful stories in the world. And if Da Vinci’s Sistine Chapel does not offend, then neither should Crumb’s Genesis. But that’s a big “if” for some people. Forget what Crumb does with the story, how do we feel about portraying God, once again as a old man with a long beard? 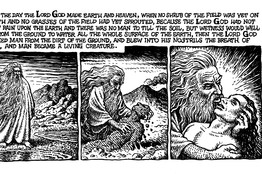 Certainly from a Jewish perspective, it violates the second of the Ten Commandments. And it won’t go down well with traditional Muslims either. But for Christians, it’s no big deal.

Once one believes that God could take on a human form in real life, it’s not so offensive to portray him as a human more advanced in years. And as many deeply believing Christian friends have told me, that God would do such a thing for us, is a sign of his incredible love for us. I happen not to share their belief, but the idea that God would take on a human form is neither crazy nor foreign to Jewish tradition either.
The Hebrew Bible is filled with examples of a largely, if not fully, humanized God. Adam and Eve hear God’s footsteps in the Garden of Eden (Gen. 3:8), Abraham receives three visitors in human form and one of them seems to be God (Gen. 18:16-22), etc. So before we go getting all high and mighty about the nuttiness of what more than a billion Christians believe, or how offensive Crumb’s work is, let’s all admit that the desire to better understand and relate to God often pulls us in this direction.
The really interesting thing about Crumb’s Genesis is how many people who may know nothing about the Bible will now give at least it’s first stories a careful read. That, for me at least, trumps everything. One of the greatest things about the Bible is that can mean so many things to so many people. And while that will probably offends fundamentalist and strict constructionists of all faiths, that very elasticity is evidence of the Bible’s sacredness.
For me, the Bible is an infinite gift from an infinite God, so how could there be only one way to read it? What is the Bible for you?