Revolutionary Road – Is it just me?

Why am I the only person I know..or even “know” in the Internet sense of “knowing”  – who didn’t hate it? 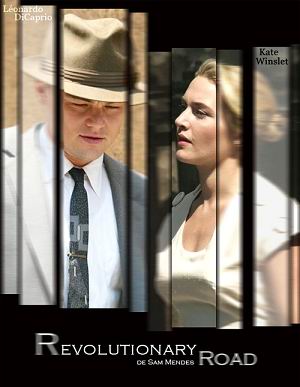 I didn’t love it, either. There was a lot wrong with it. Weak
characterization. Miscasting. Anvil-wielding mentally ill prophets.

But here’s the thing.

Whether or not Yates’ original novel intended it, whether or not Mendes intended it in his adaptation, the movie did not come off to me like a blanket condemnation of late 50’s soulless suburbia.

As I said to Michael as we left the theater, it very much felt to me like an expose of life – a person’s life –  without God.

Again – not intended, I’m sure.

But even if you don’t buy my sense of the thing, I think it’s still difficult to see the piece as a critique of the Man in the Gray Flannel Suit and his Aproned Wife – simply because Frank and April were such delusional nitwits.

It seemed clear to me that the desire to go to Paris was presented, not as a noble expression of searching souls, but simple escapism from a life that did not have to be as empty as the characters believed it to be.

The irony being that after his wife’s death, Leo moves away from the suburbs to…New York City…which many believe to be, if not as mythically romantic as Paris, at least as full of opportunities for creative, engaged people.

So my impression was not that Frank and April were brilliant spirits deadened by the suburbs, but rather that they were self-deluded dolts who couldn’t live in reality because they had no purposeful, transcendent sense of self and purpose.

And the abortion? Was the point that legal abortion would have improved April’s life? I didn’t see it at all. The abortion in itself – whether it had been legal or not, done in “safety” in a physician’s office – came off as one more delusional act, expressive of a determination to avoid the real issues, which had nothing at all to do with where you lived, but your sense of yourself – which in Frank and April’s case involved no purpose greater than “feeling.”

What I thought was most telling was Frank’s mournful comment about April’s post-abortive death: “She did it to herself,” which is a reference not as much to the self-administered abortion, but to her whole constricted life: She did it to herself.  She didn’t have to. But she did.

So argue away. We need arguments here, and while I’m not quite up to arguments about politics, secular or churchy, I can handle a movie fight, though. At least today.