All Too Human: Why We Care About Oprah’s Twitter Blunder 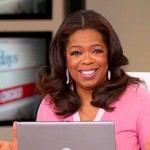 On Tuesday Oprah Winfrey made headlines. She did not give away cars or a cruise. She did not even land an interview with the First Lady or President Obama.

Rather, she shared a seemingly innocuous message on her Twitter account. She revealed that she loves “that SURFACE (referring to Microsoft’s new Surface tablet) Have bought 12 already for Christmas gifts.”

It seems like a normal message. Except for one thing. The bottom of the tweet revealed that it was sent from an iPad! Oprah praised Microsoft’s Tablet while using Apple’s iPad. It was as if she had said how much she loved drinking Pepsi while sipping a can of Coke.

Were this a friend or even a typical celebrity, we might laugh it off. But it’s Oprah! She represents much more.

First and foremost, she represents integrity. Oprah is famous for saying how she really feels. In interviews, her own integrity helps get others to open up. We trusted her book club choices because we knew she was not trying to win points for elitism or popularity. She is honest and authentic.

Thus, when we see her endorsing a product she is clearly not using, we begin to question her other choices. We wonder if we were being played.

Even so, Oprah has a saving grace. We can relate to her. She represents our community humanity. Forgetting that she is a billionaire celebrity, we see ourselves in her. This  “everyman” quality is the source of her unique influence.

It also lets us empathize with her twitter mishap. All of us have done something accidental or embarrassing with our phones or computers. We’ve sent an email to someone we didn’t mean to. We’ve accidentally called someone when we told them we weren’t available. We’ve hit “reply all” after having been reminded dozens of times not to do so.

Oprah (or someone on her staff) did something we all might do. In doing so, she inadvertantly reminded us of a core truth. We are all human, even Oprah Winfrey.

A Challenge: What Is Your Most Embarrassing Technological Mishap?

By Evan Moffic, Rabbi of Congregation Solel in Highland Park.

To Read More from Rabbi Moffic, subscribe to his free weekly nugget of spiritual wisdom here.