I was having a conversation with a friend about the evangelical interest in Jim Belcher’s book, Deep Church.  Jim’s written a good book, and I was happy to endorse it — albeit with the caveat that he and I disagree significantly on some theological issues like the nature of God and the nature of scripture. 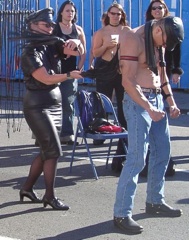 In the book, Jim takes aim at the “traditional” church and the “emerging” church.  He offers a “third way” between the two, though any fair reader can see that he’s tougher on the emerging church than he is on the traditional church, and his third way leans significantly in the direction of traditional Reformed theology and worship.  Ignored are Catholic, Orthodox, Wesleyan, and Anabaptist visions of ecclesial life, and, as Jenell points out, women.

I don’t begrudge Jim any of those (except the ignoring of women) — he’s entirely entitled to his own opinions, and to publish them.  I wish him success.  And that wasn’t really even the point of my friend in our conversation.  Instead, he was intrigued that conservatives and Reformed folks would be so taken with Jim’s book when he’s pretty tough on them, too.

While I don’t know if the evangelical interest in being hit around the head and neck fits with Christian Smith’s “sub-cultural identity theory” of American evangelicalism, it’s at least a close cousin.

But what I find interesting the category of critique that evangelicals seem to embrace, like those listed above.  Yet Jenell’s criticism of the implicit patriarchy when InterVarsity Press prints Mark Driscoll’s endorsement on the back of Belcher’s book will go unnoticed.  Christianity Today seems reluctant to challenge John Piper’s ludicrous exegesis of whirlwind passages.  And those who challenge evangelicals on other issues like sexuality or the nature of the Bible are usually ignored.

So, am I on to something, or is this simply sour grapes on my part?