My primary role at Cornerstone was co-presenting a three-part seminar with Phyllis Tickle, long-time friend and author of many books.

We did a dog-and-pony show on the emergent/-ing/-ence movement that we’ve done before. IMHO, we work pretty well together, due to the fact that we’re pretty much in accord, but we do disagree on enough things to make it interesting to those gathered.

One of the first issues that PT addressed was the terminology that has been so bandied about in this conversation. I, as usual, took issue with it, saying that the conversation about 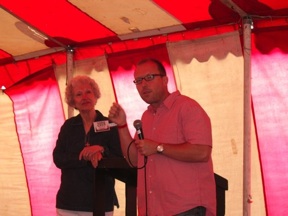 emergent vs. emerging vs. emergence vs. missional is an internecine debate, and that it will be historians a century hence who will 1) decide if we’re worthy of a name, and 2) decide what that name is.  But I will say that after spending the week talking about such things with Phyllis, and her erstwhile daughter-in-law, Mary, I’ve had a bit of a change of heart.

My usual struggle with the term “emerging” (think Scot McKnight and Dan Kimball) is not that it’s associated with a more traditional, evangelical theology. My problem is that it’s not a term associated with the very metaphors that have been so resonant to those of us in the movement, viz., emergence theories in science.

Emergence science (think Phillip Clayton), lends us words in the family of emergence and emergent. While this may seem a silly semantic difference, it actually changes the nature of the conversation significantly. Whereas “emerging” implies something coming into view and becoming prominent (a relatively simple process), “emergent” is something (or a group of somethings) arising and existing only as a phenomenon of independent parts working together, and not predictable on the basis of their properties (an impossibly complex process).

So, what I’m saying is that maybe, just maybe, the idea of “emerging” does better fit those persons and groups who feel more comfortable with conventional evangelical theologies, and “emergent” is more appropriate for those of us more interested in following the various theological and philosophical rabbit holes that present themselves to us.

This is where Phyllis comes in. She claims that all such movements are a part of “Emergence Christianity,” which itself is subsumed by the broader global emergence — the massive, overarching cultural shift, often called globalization — taking place everywhere, right now.  It is, she claims, inevitable that Christianity would be swept up in the changes that are shaking economics, politics, science, education, and every other sphere of human endeavor.

So, all this to say that I’m coming around to Phyllis’s POV. Emergence Christianity may be the best term for those of us interested in talking about the meta-religious shifts taking place right now, rather than the more parochial concerns of the “next evangelicalism” or the “rebirth of the mainline” or something like that.

Looking Back on Cornerstone: Overview
archives most recent
More from Beliefnet and our partners
previous posts