Nick Fiedler: We didn’t want Emergent to become the new club, but we wanted it to
organize so that through gatherings, cohorts, and online social
networks it could create it’s own grouping and lovingly force some
voices out into the open. That happened a little. But it seems that
recently we have lost hope in the Emergent movement. It took it’s hits
from the conservatives and instead of coming out stronger for it, it
sort of fizzled.

Anthony “Postmodern Negro” Smith: The shift is taking place. Folks are out and about playing their role
in this emerging Jesus-movement in the United States and abroad. That’s
why I’m curious about the disappointment people are describing with
Emergent Village. Emergence are everywhere in the kingdom of God. So…as
I step out into the missional stream this morning looking for God’s
activity @ the local hub I will pray for those who are disappointed. I
pray they find their place in this wonderful Jesus-movement that is
sprouting up all over the country now.

Jonathan Brink: Emergence isn’t a fad that requires me. It’s not something that I can
control. It’s something I can only participate in. It’s happening
whether I like it or not. It’s unwieldy and chaotic. It goes here when
I want to go there. It makes me wait when I don’t want to, and calls me
when I’m busy. Kind of like the Holy Spirit. And it is in these moments
that my own intentions are questioned. And I don’t like that. Who does?

John D’Elia: What the Emergent movement has happily avoided is the unchecked,
unmanaged expansion and hubris that killed off Promise Keepers
(remember them?). For the complaints I’m reading from Emergents about
people in the movement making a living at it, money has not become
either the driving force or life blood of Emergent ministry. That’s a
great thing. That’s a sign of wisdom and prudence and maturity (sorry
for the traditionalist litany there) that PK and other flashes in the
pan never had.

Jonny Baker: i liked the way emergent blew open a conversation in the US
and gave permission for questions. to be honest it was a conversation
we’d been having in the uk for about 1o years before but it was always
about networking, practice at the grassroots, and working out what it
meant to follow in the way of christ in your (postmodern or whatever)
locale. if you are disappointed fair enough. but get some people
together and live some stuff out and connect with some others doing the
same thing – that’s it!

Makeesha: If EV isn’t your thing, whatever, it’s only a small piece of the
whole movement of 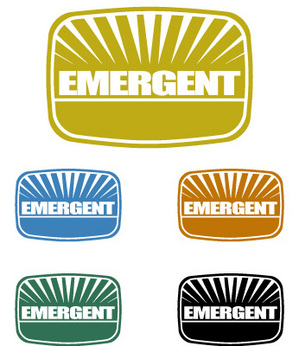 christianity anyway – but there’s no reason for
anyone to distinguish themselves APART from EV. I have seen quite a few
“oh by the way I’m not Emergent anymore” posts lately and I don’t feel
offended, I just think it’s weird. OK, so you’re not emergent anymore,
SO WHAT? What the hell ARE you doing?

Josh Brown: The Emerging Church and to a lesser extent the receptical of the
conversation, Emergent Village, are now neutered versions of what they
could be. The protectors of the conversation have A) either sold out or
B) still talking to hear themselves talk. And in it’s place is just
another cliche marketing veneer straight out of Grand Rapids. The
degree of difference between all of the hodge podged groups that fall
under the emerging/missional/resurgence banner is the degree to how
much of a UFC pride fighter Jesus really is. Other than that it’s the
same colored conversation, just a different shade.

James Mills: I have made some deep and long lasting friendships with some people
in this conversation. These people have challenged and shaped me and
helped me to become a more faithful carrier of The Name. This
conversation sustained me through a very difficult displacement from
the church I used to be a part of. And like so many other people have
said, this conversation became something more. It became a place. A
community. A network. a web of relationships. And while I don’t know
many of the 24 people who met in Washington to dream new ecclesial
dreams together have a hard time understanding what they hope their
efforts will produce I am not concerned about the outcome.

Jonathan Stegall: But this is how culture works. We cannot have a revolution of the
way church functions in a decade, or three decades, if we look more
broadly at the emerging church. It is essential that we learn a
sustainable perspective on change, in order to find out how Emergent
Village specifically, and the broader emerging church in general, can
affect change on the church at large.

Matt Scott: We (the emerging church) have always accepted new guys into the
fold, this was never ment to be members only club, and if someone acted
out of hand they weren’t rejected, they were loved. Now you want to
start talking about new guys pushing you out of the circle? What the
hell, we don’t even like cirlces here, and if we do draw them, we make them so effing big we put people in them that don’t want to be.

Drew Tatusko: If there is frustration over the lack of revolution, it is because the idea of revolution was and still is
something bound for inevitable failure. Feeling disenfranchised should
not be confused with a revolution because it is not. Selling all that
you have and following Christ to permanently alter systems that
reinforces classism, unfettered capitalist greed at the expense of
millions to incite local change, and a reified free-market religious
ethos more akin to success in business than love of neighbor  – well
that’s revolutionary. It’s revolutionary because it’s political and
social. You can’t have a revolution without it emerging from this place
and revolutions require leaders who sacrifice everything they have to
the point of death. No revolution has been without this kind of
charisma and none will be. It’s also why I despise “revolutionary”
branding like the image of a Hugo boss glasses wearing, goateed face 20
something drinking free-trade coffee while wearing a Che Guevara
t-shirt listening to protest music as if that is a revolution. That is
capitalism and you have been bought by a brand. Sorry to inform you
that what you thought were changing actually co-opted your myopia.

Paul Glavic: Is there room within EV or greater emergence for people who don’t hate
Rick Warren but are becoming increasingly interested in re-claiming the
gospel’s missional Kingdom emphasis? Or is this a conversation about
being pissed off about all of the same things? If that’s the case, then
screw the “conversation,” because it’s nothing like a Messiah who
esteemed what he saw as good within the diverse people he encountered.

Julie Clawson: So those of us who are part of this thing called emergent – who are
passionate about this call to live in the kingdom of God and thrive on
this conversation are wondering what do do. We already experienced the
droves of deserters who left because emergent doesn’t 1. hate women
like they hate women, 2. hate gays like they hate gays, or 3. believe
in a certain type of hatred of God towards Jesus on the cross (or all
of the above). Then there are all you guys who paved the way for this
conversation to even exist saying that you are disappointed that new
people joined and spoiled your fun. We are looking for guidance and
then read comments like Josh’s on your blog “maybe it’s selfish on my
part, but i just don’t feel like helping anybody else along.” It hurts
to be rejected like that. To those of us who still appreciate the
conversation and who see the good it is still doing to those who are
just now joining in, it’s a slap in the face to be told that we are
dead or fizzled out. I am the first to admit that emergent needs a lot
of help right now, but different isn’t dead, just different.

Carol Howard Merritt: There is the hope for revolution, but then there’s a pernicious
elitism that questions people who join the conversation later, or who
might be a part of a denomination, or those who fall under that most
amorphous and damning category-the people who “just don’t get it.”

Mike Clawson: It kind of sucks that so many people are wanting to pull the plug on
Emergent Village right when so many women and minorities are just
stepping up into leadership (e.g. the recent DC gathering). The big
white males that these folks have been complaining about so much are
stepping aside/making room for these others, and that’s when they all
decide to leave the party? Kind of ironic, don’t you think?

Yours Truly: Martin Luther King didn’t coach t-ball; neither did Ghandi. Start a
revolution if you want, but that’s not a price that I’m willing to pay.

So, You're Disappointed with Emergent...
archives most recent
More from Beliefnet and our partners
previous posts