Why It Matters that Jesus REALLY Rose

Last week, I spent time with some new friends in Canada. Most of them were church leaders in the United Church of Canada, the result of a denominational merger in 1925. The United Church is unabashedly liberal in its social stances, for example, affirming same sex unions in 2003. Due to my positions on the atonement and same sex marriage, I’m getting less and less invitations from evangelical groups and more and more invitations from liberal groups.

But, I came away from my time in Canada with one thing on my mind: I don’t like the package deal. Here’s what I mean:

As often when I’m with liberal groups, Marcus Borg’s name came up early in the conversation. And, as I usually do, I took that opportunity to affirm my belief in the actual, physical, historic resurrection of Jesus, something that Borg notoriously does not do. (I wrote about my experience with Borg in my book.) Many times over the rest of the weekend, I was approached by participants on the retreat who wanted to challenge me on that — why do I think it’s so important that Jesus actually rose from the grave.

And I understand where they’re coming from, because I don’t feel the same way about the historic facticity of Adam and Eve, the Tower of Babel, Jonah living in the belly of a fish, or Job’s family and cattle being wiped out by God. So it might seem rather arbitrary that I draw the line between some accounts in the Hebrew Scriptures, which I consider mythological (but nonetheless “true”), and the New Testament accounts of Jesus’ miracles, death, and resurrection.

Well, as I posted on Good Friday, I consider the miracles performed by Jesus to be extremely 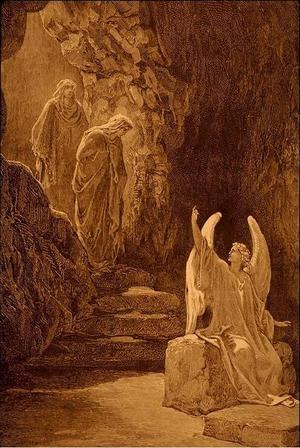 important in the understanding of his mission — with the miracles, he inaugurates the messianic age, and offers the “first fruits” of the final consummation of God’s love.

While the Jesus Seminar infamously rejected the miracles as mythological fables, I think it’s important that Jesus healed real people of real maladies. The inauguration of a new age would be rather impotant if Jesus wasn’t able to heal an actual, physical, historical woman who had suffered from non-stop mentrual flow for years, thus disqualifying her from Temple worship. Yes, she was real, and her blood was real, and her healing really meant that she could join with God’s people and experience temple worship.

Why is that important? Because I’m a real person. Because the people to whom I have ministered in Jesus’ name are real persons. We’re not hypotheses, fables, or legends. And we need real healing, all of us. While our realities may be largely socially constructed, we have real DNA, real physical, material properties.

Thus, since the resurrection of Jesus is his defeat of death, evil, and grief, it’s important to me that it really happened. Without a resurrected Jesus, Christianity is impotent. (Exhibit A: liberal Christianity) And I don’t mean a Jesus who was “resurrected” in the Disciples’ hearts, and in my heart. I mean a real resurrection in the space-time continuum by a physical being known as Jesus of Nazareth, as 99.99% of Christians for the last two milennia have believed.

So, what I’m trying to navigate is my discomfort with the traditional package deal: If you affirm GLBT rights, you end up denying the resurrection. I realize this isn’t true across the board, but it seems to me to happen more often than not. Some commenters will say that’s because you have to pitch the Bible out the window to affirm GLBT rights, but that is clearly not the case.

So, here’s my pledge: I’m going to keep theologizing about ways to affirm historic, orthodox Christianity while undermining the historic Christian perspectives on social issues like slavery, the role of women, and homosexual rights.