Praying the Bible – The Ladder of Lectio Divina

Though dates differ, Guigo II lived from about 1115 to 1198. His official title was the Ninth Prior of the Grand Chartreuse of Carthusians. That’s a mouthful. Here’s what it means: The Carthusians are an order of monks who are particularly strict (for example, they wake up every night at 11:45 P.M. and pray for three hours!). The headquarters of their order is the Grand Chartreuse (Charterhouse), which is just outside of Grenoble, France. The Prior is the leader of the Charterhouse and, therefore, of all Carthusians around the world. Guigo II was the ninth monk to lead the order.

In about 1150, Guigo II wrote The Ladder of Monastics (also known as The Ladder of Four Rungs). He compares the way monks pray and seek God to the ladder that Jacob saw climbing to heaven at Bethel (see Genesis 28:11-19). Guigo begins his book by telling about how all this occurred to him while he was working in the garden:

One day I was engaged in physical work with my hands and I began to think about the spiritual tasks we humans have. While I was thinking, four spiritual steps came to mind: reading (lectio), meditation (meditatio), prayer (oratio), and contemplation (contemplatio). This is the ladder of monastics by which they are lifted up from the earth into heaven. There are only a few distinct steps, but the distance covered is beyond measure and belief since the lower part is fixed on the earth and its top passes through the clouds to lay bare the secrets of heaven.

While earlier Christians prayed lectio divina in something of a “web” form, jumping in and jumping out of steps in any order they chose, Guigo changed the metaphor to that of a ladder. With that hierarchical model, lectio divina has a specific starting point and ending point. We begin, he writes, on earth, reading God’s Word. Then we climb the rungs of meditation and prayer, finally arriving in the clouds of heaven in contemplation.  Guigo compares this ladder with a couple found in the Bible, as he continues: 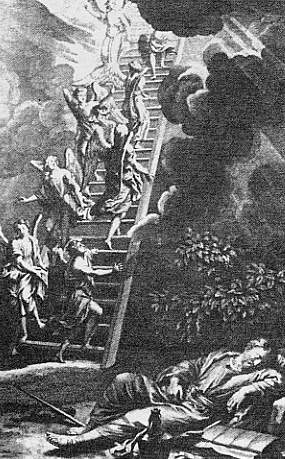 This is the ladder Jacob saw, in Genesis, that stood on the earth and reached into heaven, on which he saw heavenly angels ascending and descending, with God leaning
upon the ladder. From the ascending and descending of the angels is
understood that the heavenly angels delight us with much spiritual
comforting and carry our prayers up to our Lord in heaven, where he
sits on high, and bring back down from him the desire of our hearts, as
is proved by Daniel. By God’s supporting the ladder is understood that
he is always ready to help all who by these four rungs of this ladder
will climb wisely, not fearing nor doubting that such a ladder will
really help us.

Guigo’s format is the one we’re going to follow in this book. Maybe I’m a slave to formulas or maybe I’m not as good at lectio divina as I ought to be, but I find his metaphor helpful. You may graduate to a more fluid method of praying Scripture, and I’m sure even Guigo would say that we are not bound to his formulation. But the linear structure of a ladder is a good starting point to learn lectio divina.

read next post
Stanley Fish Is Right about Faith, Again
archives most recent
More from Beliefnet and our partners
previous posts