Maybe Phyllis Tickle’s Next Book Should Be about Politics 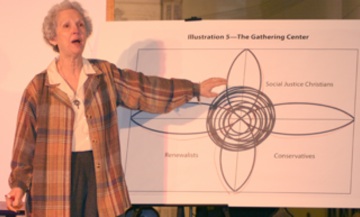 In Phyllis Tickle’s latest book, The Great Emergence: How Christianity Is Changing and Why, she writes of the “centering” of Christianity. In her famous quadrilateral diagram, she demonstrates how liturgicals, social justicers, pente-charistmatics, and doctrinal evangelicals are all swirling toward the center. Many of us find it a compelling argument, and the latest data seems to reinforce her thesis.

Well, this morning, I was watching Morning Joe, as I often do with my, er, morning joe. (I actually like Joe Scarborough, although his recent defense of the torturers has left me cold.)

Of late, Joe has been hammering on the fact that only 21% of Americans identify themselves as Republicans. It’s a bad story for the GOP, especially as blue encroaches from the coasts into the Heartland — Joe said this morning that it will soon be the Dixie Party, meaning that the southeastern U.S (a.k.a., the “Deep South”) will be all that’s left in the Republican base.

Of course, the switch of Arlen Specter really brings this home. And it was in talking about Specter that Joe said something thing reminded me of Phyllis:

“There will always be ideological lefties and righties,” Joe said, “But they will be increasingly small and increasingly hardened.” And, I’d add, increasingly irrelevant. (BTW, this is not an exact quote from Joe, but as closely as I can remember it.

In fact, that’s exactly what Phyllis says about the four corners of her quadrilateral. And it seems to be fairly accurate.

So, what say you? Are our politics and our religion reflective of one another? Or reflective of some larger shift toward the pragmatic center? 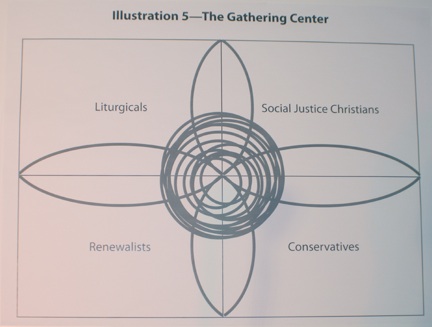