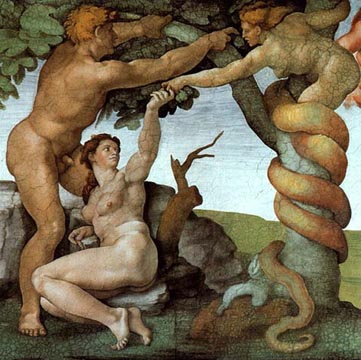 When I was growing up in a moderate, centrist church — somewhere between mainline Christianity and evangelicalism — Original Sin was a given.  I first learned about it in youth group, and we regularly talked about it.  Actually, it’s more accurate to say that we talked about a life with Christ, and the notion of Original Sin was in the background.  It was assumed.  And I cannot remember that it was ever debated.

In other words, I assumed that the doctrine of Original Sin was a biblical notion, and that all Christians accepted it as gospel truth.  Of course, neither is true.

In college, Original Sin was also assumed by the Campus Crusaders and Navigators who ministered to me, as well as in the little bible church that I attended.  In fact, here’s a telling section from that church’s current web page on doctrine:

Man was created in the image of God to enjoy friendship with Him (
Genesis 1:26). Man sinned and his fellowship with God was broken (
Genesis 3). Man is now deceitful and desperately wicked (
Jeremiah 17:9).
He has the capacity for all sin and lives his life independent of his
Creator. In his natural rebellious state, his destiny is to spend
eternity totally separated from God in the lake of fire prepared for
the devil and his angels (
II Thessalonians 1:8;
Revelation 20:11-15).

But, while in college, I also took at class on the theology of Augustine from an eccentric professor, Charles Stinson, and therein I learned that the great father of Western theology was the author of the doctrine of Original Sin.  Of course, Augustine was not making it up ex novo, but was taking as his inspiration the account of creation in Genesis 3 and certain Pauline texts.

In seminary, I learned from John Thompson that John Calvin and his theological heirs reified the notion of Original Sin and that it hadn’t played much of a role in medieval and Scholastic theology.

And sometime later, I discovered that whole branches of the Christian family tree — most notably, the Orthodox Church — has never embraced Original Sin.

I have come to reject the notion of Original Sin.  I consider it neither biblically, philosophically, nor scientifically tenable.  And I’m going to spend this week blogging about why I’ve rejected it.  I look forward to hearing your thoughts…

(HT: Richard Beck for inspiring me.)