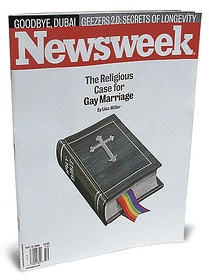 Newsweek editor Jon Meacham gambled this week, and he gambled big.  In what is, by any measure and extraordinary piece of journalism, Newsweek religion editor Lisa Miller wrote a cover story that basically says, the Bible does not define marriage nor does it condemn same sex marriage, and anyone who thinks it does is a closed-minded bigot who twists the Bible beyond recognition.

And by “extraordinary,” I mean not-at-all-ordinary.  Whether or not you agree with the gist and thrust of Miller’s piece, it is stunning to see one of the three major weeklies turn one of their own reporters into an opinion essayist, and to run said essay as the cover story.  It’s one thing when Joe Klein or Charles Krauthammer opinionates in the pages of TIME, but you don’t see David Van Biema, their religion writer, inveighing against the Anglican Church in America or passing judgment on Mormons’ sacred undergarments.

There’s an historic wall between the editorial division and the reporters of a newspaper or newsweekly.  Thus, regardless of all the conservative hand-wringing over the leftward tilt of the media, the media could still maintain the patina of objectivity.

But Meacham is no dummy.  He can look across the media landscape and see that the outlets that wear their politics on their sleeves (think FOX, WSJ, MSNBC, The Atlantic) are succeeding — or at least surviving — while the old guard is having a bad decade, bad year, and really, really bad week.  In fact, just today, the WSJ reported the Newsweek is joining the throng of media to make cuts this week — on top of 111 staffers cut last Spring — and to consequently shrink coverage and page count.

In that same article, Meacham says that he’s shifting the periodical: “We are trying to be more provocative.”  This week’s issue is Exhibit A.

And it’s no surprise, the blogosphere is in an uproar.  Everyone’s started in their respective corners and come out swinging.

On the right, Al Mohler predictably says that Miller’s is an agenda-driven piece and that it avoids the commonsense interpretation of biblical passages.  In a nice literary flourish, he puts the phrase “progressive scholars” in scare quotes, hardly hiding his scorn for such a foul tribe.  He lands the plane where his own tribe often do, blaming the MSM for having a scary-elite-liberal bias:

The national news media are collectively embarrassed by the passage of
Proposition 8 in California.  Gay rights activists are publicly calling
on the mainstream media to offer support for gay marriage, arguing that
the media let them down in November.  It appears that Newsweek
intends to do its part to press for same-sex marriage.  Many observers
believe that the main obstacle to this agenda is a resolute opposition
grounded in Christian conviction.  Newsweek clearly intends to reduce that opposition.

Erin, guest-blogging for Rod, takes particular aim at Meacham, who is known in Washington circles as a faithful, if progressive, Episcopalian.  She lets Larison do her talking for her, and then sums it up with a broadside against our supposedly relativistic age that must make Rod’s vacation even more relaxing:

[This] battle among Christians is a battle over Christian morality, over
the notion that God does indeed expect His faithful followers to
conduct themselves according to moral standards which are expressed in
the Bible and taught faithfully in Christian tradition. Our
relativistic age has had a problem with the whole idea, and is
constantly re-inventing the notion of morality to mean whatever we want
it to mean.

Mollie Ziegler at GetReligion is particularly torqued.  She applies the phrases “unvelievable ignorance,” “grossly unfair” and “junior high” to Miller — and that’s just about the first paragraph of the essay!  In three separate posts, Ziegler accuses Miller of hermeneutical hackery, error-riddled and emotion-driven journalism, and cherrypicking her sources.

Predictably, Christianity Today, NRO, and The American Spectator all come out swinging, too.

In the center, a couple of Bnet bloggers try to stay above the fray. Rabbi Brad Hirschfield finds Miller’s exegesis lacking since she both excoriates conservatives for using singular verses out of context and herself uses singular verses out of context.  “Deep down,” he writes, “neither group really cares as much about the Bible, as they
do about the conclusion which they have reached on gay marriage and
about having God on their side.”

Steve Waldman, a Newsweek alum, and now my boss’s boss here at Bnet, is dumbfounded that Meacham has taken Newsweek, seemingly overnight, from a newsweekly to an “out-and-out opinion-oriented magazine.”  Steve promises a follow-up post on the substance of the article itself, which he thinks, “does raise some very legitimate and provocative points.”

On the left, Paul Raushebush calls Miller’s piece “excellent and provocative,” but then merely copies and pastes the first several paragraphs from newsweek.com.

In less than 3000 words, Ms. Miller produces one of the more reasoned
and calm studies to date on the context and role marriage is given in
religious text. At the same time, sincere respect is demonstrated for
the core messages of the Bible, including the importance of family and
the gift of love.

The sad thing about all this is that we religious types make our
insecurities, issues and fears the issues of God. The Bible does not
support that. The Bible supports a life that mandates that we help all
people feel the love, acceptance and presence of God. That would be
everyone, gay and straight, black and white, rich and poor.

The rest of the left, as far as I can tell, is thus far silent.  Nothing at Huffington, the DailyKos, [UPDATE: DailyKos take here] The New Republic, Mother Jones, or the Utne Reader.  The right may be right that the media tilts left, but as one who is progressive and religious, I’m particularly pissed at how little play religion gets in the progressive press.  This dust-up is a case-in-point.

My own take: I appreciate what Meacham is trying to do.  I have a great deal of respect for him, and I think he’s in a very tough spot, what with the media sand shifting beneath his feet.  MSNBC made the shift to being outwardly on the left.  As a result, they are kicking CNN’s subtly leftist butt in primetime, and running neck-and-neck with FOX.  It makes a lot of sense for Newsweek to run more opinion pieces more often.

But the problem, methinks, is that Miller has not established a reputation as a pundit, and Meacham threw her to the lions.  He knew she’d be savaged by the right, as he notes in his column, but I think she was thoroughly unprepared.  As such, she is deservedly being taken to task for cherrypicking her sources and her biblical scholars, and for not conveying the many complexities and nuances of the SSM debate.

On the other hand, there’s only so much you can say in 3,000 words.  That’s why I’m so disappointed that none of the major mags on the left have come to her defense.  But I know why they haven’t: THEY DON’T HAVE ANY WRITERS WHO KNOW ANYTHING ABOUT RELIGION!!!  (Yes, I’m shouting.)

Hopefully Rod and I can add more light and less heat to this debate.

[UPDATE: Andrew, back from vacation, weighs in.]