Is There a Religious Left?

Not yet, according to Jeff Sharlet.  Sharlet was recently asked to contribute to a book on the supposed Religious Left, and he has posted the draft of his chapter at The Revealer (to which you all should subscribe).

This is a question that interests me, in part because I’m now commonly placed in the “liberal” camp, not only by self-proclaimed conservatives, but also by emergent movement leaders who wish that the theological provocations of McLaren, Pagitt, and Jones would just go away.  I’ve been invited to a summit of leftward theologians in March who have a Ford Foundation grant to “rekindle theological education” among progressives. 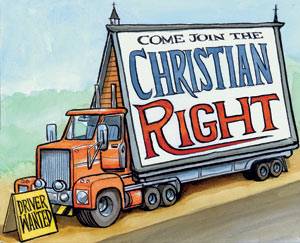 I go into meetings like that with healthy doses of trepidation and skepticism.  I don’t consider myself a “liberal” in the common, popular use of the term* (although I clearly am — as are most of us in this democracy — in the philosophical use of the term).  I tend to think that the bipolarities of “liberal v. conservative” are a holdover from Enlightenment epistemology and, as such, are less and less helpful.  I thought of this again as I heard Pat Buchanan proclaim on Morning Joe this morning that Obama’s cabinet picks thus far are “center-right.”  I continue to think that BO was elected because Americans see in him a pragmatism reflective of William James and John Dewey (but the roots of which go back to Ralph Waldo Emerson).  It’s this progressive pragmatism that is America’s real contribution to epistemology.

Anyway, back to Sharlet.  He writes, in brief, of the institutionalization of the Religious Right, and of the half-hearted attempts at a Religious Left.  Then he sets forth his proposal that a new movement be formed, not from homogeneity, but from strife.  Money quote:

But
life, Darwin reminds us, is not a value, it’s a fact, and one defined
not by harmony but by struggle. The good news is that that is the good
news: the rowdy, pluralist approach to politics embraced by religious
leftists is the fundamental faith of America. Not perfect harmony;
glorious cacophony. “The noise of democracy,” according to President
James Buchanan, who was a failure in nearly every respect but for the
high regard in which he held the American sacrament of arguing.

Brothers and sisters: Let us argue. It’s what we do best.

I am currently reading Sharlet’s latest, The Family: The Secret Fundamentalism at the Heart of American Power, about the mysterious “Fellowship” that puts on the National Prayer Breakfast every year.  Sharlet’s writing is breathtakingly good, and his research is unparalleled.  His earlier book, Killing the Buddha: A Heretic’s Bible, (and eponymous website) is similarly excellent.

*I’ll admit it, I do drive a Volvo.  But I do NOT drink lattes (unlike some people I know, who drink “venti-non-fat-vanilla-latte-extra-hot-with-a-shot-of-protein).  I drink my coffee black, like all good Scandinavians.