Rod, it was great to meet you and sit on your front porch drinking
coffee.  Actually, it was even more wonderful to meet Julie and the
kids, your chickens, and your incapacitated dog.  I appreciated reading your story, and I’ll comment more on that on Monday. 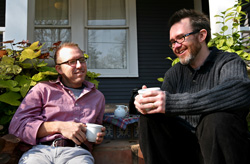 Over the next couple weeks, I know we’ll get into all manner of
angles on the topic of same sex marriage, be they philosophical,
theological, and biblical.  But first, I’d like to wonder aloud about
the role of the state in defining marriage.  (This will drive many of our commentors to drink, since they seem to think that all Christian reasoning begins and ends with the biblical argument.  But, nay, there are several ways to approach this.)

Our government does, indeed, define marriage.  This didn’t happen
overnight, nor did it happen with, say, an amendment to the
Constitution.  Instead, it happened as do most items in our legal code,
over time.  There have been campaigns for and against polygamy and miscegenation, but these now lie decades in the past.

At local and state levels there have
been various strictures on who can marry whom and what kinds of sexual
acts are legal and illegal.  And, as with so many laws, those have
changed over time.  Interracial marriage is no longer banned, and most
local anti-sodomy laws have either been dropped, ruled
unconstitutional, or simply not been enforced.