Down Syndrome and Friendship 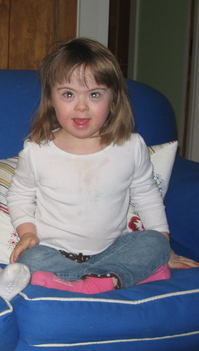 “What’s the point of special education?” my friend asked.
She has a daughter with Down syndrome who is the only kid with special needs in
her kindergarten class. Her daughter is struggling to keep up. The teacher
doesn’t have any training for kids with special needs. “Are we trying to fit a
square peg into a round hole?”

Here’s the question: Is the purpose of education purely
academic? If it is, then perhaps there really isn’t a place for kids with
intellectual disabilities in mainstream classrooms (although even then, I
believe that most academic exercises can be modified for a variety of learning
abilities). But I would hope that education is about more than learning times
tables and writing sentences. I would hope that there’s a social component, a
component that involves learning to accept one another even when we have
different skills, befriending one another even when those friendships cross
racial or economic or intellectual lines. I would hope that there is a place
for our daughters in a classroom with typically-developing peers, and I would
hope that their presence would be positive for everyone involved.

I grew up in a homogenous elementary school. Everyone had
white skin except for one boy whose parents had immigrated from India. I didn’t
know anyone with disabilities. And to this day, even with a daughter with Down
syndrome, I am struggling to learn how to cross those social lines and become
friends with those who are considered different from me.

A few weeks ago, I wrote about my hope and prayer that Penny would have friends, and about my concerns that I haven’t done enough as a mother to facilitate those friendships. In the time since I wrote that post, Penny has had her playdate with the friend from ballet (it went well–hopefully more are in store), she went to a museum with two other friends and had a great time, and one of the readers of this blog suggested that Penny become penpals with her daughter. They have exchanged their first round of letters, and Penny has talked about her new friend via the mail every day.

I was in the grocery store last week. There’s a man who bags groceries there–let’s call him “D”– who has Down syndrome. Most of the other baggers are young people with no sign of a disability. I watched as one of these young men yelled to D. It must have been an inside joke, for they shared a quick laugh before they returned to their work. From my vantage point, I wasn’t watching a man with Down syndrome and a man without disabilities. I was watching two friends.

So I am hopeful–hopeful that Penny will continue to make friends, hopeful that she will grow up and share a laugh at work, hopeful that integrated classrooms will change things for our culture. And I’m hopeful that friendships that cut across differences help us to realize that we’re awfully similar to one another after all.

read next post
What Are you Doing for Lent?
archives most recent
More from Beliefnet and our partners
previous posts