Perfectly Human**: All People Are Messy, by Libby Germer 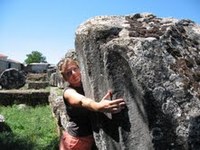 My brother Daniel was the kid who pooped in the public pool.
He also was the cute Korean kid with spiky hair who made parents nervous
because he was still screaming and splashing like a drowning person in the
shallow end, even though he knew how to swim. You never would have known that
it was Daniel who pooped though, even if you had been there, because my other
siblings and I had an elaborate scheme of creating a distraction and then
evacuating the premises before the lifeguard had a chance to blow his whistle
and yell, “Everybody out!”

There were three summers when I had a driver’s license,
three younger siblings, and three months in which my working parents needed me
to hold down the fort. After that, I went to college and childcare got trickier
for my parents. But when I was home, we spent mornings in front of the TV or
making prank calls, and afternoons driving around town with an eye for cheap
entertainment. The public pool was a no-brainer. There, I could suntan on the
deck with my friends, give my sister the task of keeping an eye on Daniel, let
our youngest brother play on the stairs, and everybody got some space. The only
real problem, of course, was that Daniel wasn’t truly potty-trained until he
was fourteen, and even then he never wanted to get out of the pool to go to the
bathroom.

Now I am able to be objective enough about my childhood to
admit that it was difficult for my parents to manage three kids plus an adopted
son who has developmental disabilities. I can even admit that it was difficult
for all of us, and that we each have some regrets about the way we handled
Daniel’s slowness, clumsiness, and general disabled-ness. But at the same time,
I was proud to claim Daniel as my brother. I attended Tae Kwon Do and Korean
culture classes. I learned to explain his behavior with the term
“Developmentally Delayed.” I stuck up for him when other kids made fun of him.
I never imagined that life would be “normal” or “easier” without him in our
family.

Looking back, I’m unable to separate my childhood from Daniel’s,
despite our differences. We are brother and sister; we shared jackets, relatives,
vacations, and memories. It’s not so much his contributions to society that
matter (though they are significant in my opinion), but his very being, his
presence on the earth that makes him valuable. I’m frightened by the voices in
our culture that seem more and more to say that one’s right to exist is
dependent on one’s ability, or lack of disability. I think we just don’t want
to have to clean up after other people, and that we are trying to ignore the
fact that people are messy. All people are messy.

I don’t think I did a very good job of taking care of Daniel
during those long summers at home. I could have been much more engaged,
proactive, and responsible, especially at the public pool. I have some regrets.
But I don’t regret spending years of my life in a house with someone who taught
me that people make messes, that loving people is an untidy business, and that
a lot of maturity and insight comes with caring for someone less able than you.
I am proud to have been raised in a family that valued all kinds of life, not
just the kind that can clean up after itself.

Libby Germer is a high school history teacher who lives in Richmond, VA
with her husband and two year old son.

Parenting: The Good, The Bad, The Ugly
archives most recent
More from Beliefnet and our partners
previous posts