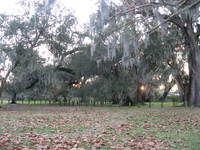 My husband’s
family is from New Orleans. He spent much of his childhood there, and most of
his aunts, uncles, and cousins still call New Orleans home. I fell in love with
the city after his mom became ill with cancer. We lived with her for a few
months, and I stood in awe of this place that embodied carelessness and risk
alongside beauty and delight.

It was two years
after Peter;s mom died that Hurricane Katrina hit. I wrote the following
reflections three months later, in December of 2005, just after we visited New
Orleans:

In the past, a
trip to “NOLA” as the natives denote it, has been filled with sights and sounds
and smells of delight bordering on decadence. The food is rich, the scenery
exotic, the lifestyle relaxed and indulgent. My husband’s family lives in an
old part of the city, “Uptown.”. St. Charles Avenue runs through Uptown, and
there are moments when it feels like a return to a bygone era with the
forest-green streetcars gliding through the center of the road and live oaks
spreading their branches low to the ground and quiet, stately white houses
rising up behind wrought iron fences.

Uptown was part of
the city built on high enough ground and far enough away from the breaches in
the levee that it only partially flooded. Peter’s relatives were lucky, as it
were–they had second homes or friends who could take them in or enough money to
rent an apartment and put their kids in private school in another city. Lucky
too, in that the extent of the physical damage to their property included one
new roof, some water damage to the walls, the need for a new refrigerator. But
the city wasn’t functioning–no power, no water, no stores open, no mail or
phones or streetcars, no country club, no clear plan for the future. In
November, though, the family started to come back. New Orleans was still home,
and even Peter’s 85-year-old grandparents wanted to trade the comforts of their
house on the coast of California for their home Uptown, even if there was a
broken window and the smell of mold and limited provisions at the grocery
store. They all came home for Thanksgiving, and we decided to join them.

The flight down
was full, and I wanted to know the stories of each individual. I didn’t ask
anyone, though I did learn that the teenager sitting behind me had been placed
in a northern boarding school until her school reopened. I know the little girl
in front of me still didn’t understand what happened as she kept asking, in a
loud voice, “What happened with Hurricane Katrina?” The whole city, as it
turned out, felt subdued, depressed. I saw it first in traffic patterns.
Streetlights, for the most part, weren’t working, so cars had to inch their ways
through intersections. It would have been surprising for anyone to honk their
horn. It would have been equally surprising for anyone to wave in greeting. As
the plane descended, on a clear day that highlighted the city’s topography–the
curve of the river, the expanse of the lake, the canals that funnel water from
one to the other–we peered out the window to look for signs of the destruction
we knew to expect. From that height, all we could see that looked unusual were
the bright blue tarps that dotted the roofs of houses. Otherwise, it looked the
same as ever.

Even the car ride
from the airport, when we again almost eagerly attempted to immerse ourselves
in devastation, was mild. Sure, we saw some signs down and there was a tank
with national guard troops guarding one strip mall, and the local Popeye’s was
closed. Some houses had the spray paint that indicated a search had been
performed within; two brick mansions had burnt to the ground. We noted stumps
where trees had fallen, and Audubon Park looked, as my husband said, like it
had been raked from above. Everything seemed a little gray and empty and slow
(and it was a slowness that felt like sickness, not a slowness that comes from
luxurious amounts of time), but it all looked familiar and we could imagine it pulsing
with life again.

The next afternoon, we climbed into the back of Peter’s aunt and uncle’s SUV with both a video and still camera, and we began a tour of the city. Uptown, we quickly learned, was deceptive. Only a few blocks away, at the point where the water finally had stopped pouring into the city, the devastation began. And continued, for mile upon mile upon mile, block upon block, house after house, neighborhood by neighborhood. The water respected no demarcations between rich and poor. We saw as many ruined multi-million dollar homes as we did dilapidated small dwellings. Everywhere else in the city–Lake View and Lake Vista (the areas of “white flight”), the Upper Ninth Ward (home to many African-Americans), New Orleans East, Mid-City, City Park–bore the undeniable traces of merciless disaster. Piles of debris lined the sidewalks–mattresses and refrigerators were usually the only distinctive items, the rest was just a jumble of clothing and trash and household objects far beyond salvation. Mounds of dirt and tree limbs and trunks filled empty lots. 144 million cubic yards of debris, we were told, needs to be removed from the city. In most places we could see the ominous muddy line that traced across the front of buildings and proved that stagnant water had pooled up in living rooms and kitchens for weeks on end. We saw few people. More cars sat than drove, covered in a film of gray dust, many with broken windows, never to run again. Workers with gas masks pulled detritus out of houses.

We got out of the car at the site of the Southern Yacht Club. Boats were piled on top of each other by the dozen, looking like a little boy had a temper tantrum, overturned a basket of toys and refused to clean it up. Hulls sliced into decks and bows crunched into pavement and snapped masts dangled. The Yacht Club itself burned downed after the storm. The dozens of trophies won by Peter’s great-grandfather, a recreational sailor, sank to the bottom of the lake.

And the tour continued as more of the same. Mind-numbing scenes of ruin. Heart-gripping, emotion-stopping repetition of destruction. 285,000 homes affected, mostly destroyed. Nothing operative: no power or water. No people. No fast-food joints or Wal-Marts. We had to take a pit stop in a parking deck where the asphalt crunched underfoot as if it had been baked in a kiln. We drove up on the 17th Street levee to see the place where the water came through–a 50 yard gap in the retaining wall that now has rusty metal stakes protruding behind it. The houses and trees in its immediate path had been engulfed–oaks snapped in two and houses without a water line because the water had been overhead. The workmen politely asked us to leave.

It raised all the appropriate questions–ecological, sociological, anthropological, political, economic. The city was a mess to begin with: bad education, high poverty, high crime, high murder. Now the schools are closed, the population has fled, there has been only one murder since the hurricane, and it was a crime of passion. The politicians continue to bicker. The corruption of levee boards and school boards gets in the way of making any progress. The local newspaper reported that the levees had been inspected only months before the hurricane exposed their flaws and weaknesses. The inspectors spent five hours surveying the 100 miles of levees. They pronounced them in fine shape, ready to withstand a storm. Had they been up to code, even to the code required for a Category Three storm, it is unlikely that they would have been breached.

We still go back to New Orleans once a year. We still love the pulse of it, the Caribbean feel, the storefronts the color of mango and cherry tomato, the food, the music. We still love the people–the smiles and laughter, the decadent hospitality, the sense that people belong to this place and no other. We’re saddened by the reports of violence after the storm, violence that exposed deep-seated racial prejudice. We’re heartened by reports of education reform. And we’re grateful for the countless women and men who have given time, energy, prayers, and ideas to making the city flourish again.

Five years later, may New Orleans become a place of healing, where the beauty and delight remains, and the decay and destruction has been washed away.

read next post
What I'm Reading: Articles on Hurricane Katrina, Autism, Hospice Care, Emerging Adulthood, and Prisons Without Walls
archives most recent
More from Beliefnet and our partners
previous posts