Perfectly Human**: Can You See Me? by Ellen Painter Dollar

Ellen Painter Dollar is a
writer whose work focuses on faith, parenthood and disability. She is writing a
book on the ethics and theology of reproductive technology, genetic screening
and disability, and she blogs at Choices That Matter
and Five Dollars and Some Common Sense. 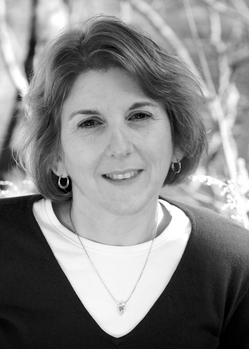 A few weeks ago,
when we were leaving my kids’ school fair, a girl in front of us turned around
and walked backward toward her family’s car so she could keep her eyes glued on
me. Because I have a genetic bone disorder called osteogenesis imperfecta (OI,
also known as “brittle bone disorder”), I’m short, crooked, scarred, and walk
with a limp.  I realize I don’t look like your average suburban mom, but I
will never get used to being assaulted by stares.

Some years ago, my
husband and I were hiking in Yosemite National Park. A muscular hiker-dude drew
alongside us and gushed, “Wow, I really admire you for doing this!” before
leaving us in his dust. He meant it as a compliment, I know, but here’s what I
heard: “You look like you’re having such a hard time, and it’s so obvious that
there’s something wrong with you that I decided to bestow some encouragement
upon you. You’re welcome.”

My daughter also has
OI, and when she is recovering from a fracture, strangers who notice her cast
will often start telling us about their own broken-bone travails–how it will be
better before you know it, how bad the cast smelled when it came off, how upsetting
it was to sit on the sidelines during soccer games. I smile and bite my tongue,
because this is really not the same as little Johnny breaking his wrist
falling off his skateboard. Our fractures happen frequently, unexpectedly, and
as a result of the most ridiculous, mundane scenarios (sitting down in an
awkward position, slipping on a piece of paper). When I first tell a new
acquaintance about our bone disorder, they sometimes ask whether drinking more
milk might help–as if it has never occurred to me, during four decades of
having this disorder and a decade of parenting a child with it, that following
FDA guidelines on calcium intake will solve all of our problems.

Why do these
interactions with strangers bother me so much? Am I just prickly and easily
offended? Do I perceive my disability as something shameful, not suitable for
public conversation? Not at all. In fact, I have made a career out of educating
people about OI and sharing my experiences. Before having kids, I was the
communications director for the national OI Foundation, and now that I am a
freelance writer, living and parenting with OI are central topics. I love
talking and writing about OI. And sometimes, I welcome strangers’ responses to
my disability.

I swim regularly at
our local pool, and one day last year, a man came over and asked if he could
use my lane once I was done. As I gathered up my things, he said, “May I ask
why you have all of those scars on your legs?” I told him about OI, my broken
bones and many surgeries. He observed that swimming must be great exercise for
me (it is), and then we said good-bye.

Here’s the
difference between the public interactions that I loathe and the poolside
conversation that I welcomed: With the former, people respond to me as a set of
physical traits rather than a person. The staring children see only the scars
and limp, instead of seeing a mother and authority figure toward whom children
should not behave rudely. The admirers decide I am worthy of praise based
solely on my outward appearance; admiring me for my disability makes about as
much sense as admiring a beautiful woman because she is beautiful. The advice
givers define me as a problem in need of fixing.

My fellow swimmer,
however, responded to me as a person rather than a set of symptoms. Rather than
defining me as a freak, a role model, or someone in need of help, he asked me
to define myself. He did not simply notice me. He saw me.

Jesus gathered
around him those who were defined and treated according to their most obvious
outward traits–tax collectors, people with physical and mental illness, women,
children. I feel a special affinity for Zacchaeus, who was not only an abhorred
tax collector, but was also short (like me) and probably used to being
overlooked in crowds. (I am regularly mystified by the unthinking confidence
with which regular-sized, physically able people throw their bodies around.
They careen around corners, gesticulate wildly, walk with eyes glued to their
Blackberrys, confidently step backward–all without thinking that there might
actually be a person, smaller than them, in the space they so blithely occupy.)
Jesus did not merely notice Zacchaeus. He saw him, ate dinner with him, and
invited him to try a new way of living.

When the crowds
balked at Jesus’ eating with Zacchaeus, Jesus replied that, “The Son of Man has
come to seek and to save what was lost.” (Luke 19:10) What bothers me most
about staring, admiring, advice-giving strangers is that ironically (given that
I am the focus of their unwanted attention), they make me feel lost. They make
me feel that I don’t exist, that I am merely a jumble of broken bones,
scars, crookedness, and pain.

The physical
consequences of my OI are pretty hard to miss. I do not fault people for
noticing and wondering about them. But I appreciate those who move beyond
noticing my disabled body to see the person who inhabits it.

**For an explanation of the title “Perfectly Human,” and to read the first entry in this series, click here.

To read all the entries in the series, type “Perfectly Human” into the search box in the upper right.