Lent, Law and Gospel According to Johnny Cash 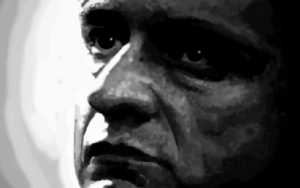 When I hear that whistle blowing, I hang my head and cry…

It’s Lent and I’ll be giving up Barry Manilow… for Johnny Cash. Seriously. I’ve created a “Cash” station on “Pandora” and I’m playing him, religiously. There’s nothing like a stash of Cash when I’m feeling too big for my britches. I can count on him to deliver a lethal dose of “true” to sober my up. He turns me right way round (repentance) and back to Father. Try him. I  dare you.

I’ve never known how to peg Johnny Cash. He is “The Boy Named Sue” and “The Man in Black.” He is country, classic rock, blues, outlaw, folk and gospel. Cash was/is… Cash. For nearly six decades he rode the rail lines of his own deeply personal music – personal made painfully public. It carried him several times in and out of popular acclaim, and under and then through crippling
addictions. Start to finish Cash’s music changed little, though it always depicted a man who longed to change himself, but could not. Johnny Cash bellowed out one long blatantly public penance borne from the shame of blatantly public guilt.

Admitting our guilt, said Cash, is the purist form of sanity. He had a profound sense of God’s relentless holiness, and his own relentless ungodliness. God, he admitted, always gets the last word.

Go and tell that midnight rider

He’s coming, and is he ever ticked!

And he decides who to free and who to blame.

Everybody won’t be treated all the same.

There will be a golden ladder reaching down when the man comes around.

Johnny Cash “When the Man Comes Round”

Cash levels bad news, first. He damns to hell any “I’m Okay, You’re Okay, It’s All Gonna Be Okay” Pollyanna optimism. Nothin’ and nobody is okay! By laying bare his confession, he demands, as we dare to listen, that we lay bare our own confession. There may be reasons; there are no excuses, and any hope of salvation from our plight of self-inflicted doom is going to prove costly…
to someone.

And how to shelter from the rain

Have to be restrained

God help the beast in me.

Johnny Cash “The Beast in Me”

In the second half of his career, with the persistent mercy of his second wife, June Carter, Cash began to reach out for the grace he knew he needed.

I never thought I needed help before

I thought that I could get by – by myself.

Now I know I just can’t take it anymore.

With a humble heart, on bended knee,

I’m beggin’ You, please for help.

Finally, he seemed to both receive forgiveness from God and extent forgiveness to himself.

I couldn’t manage the problems I laid on myself

So I finally surrendered it all brought down in despair

As Martin Luther once put it, we have the Law and we have Gospel, in that order. Listening to Cash helps me remember this; remembering keeps me sane, and true. Guilt is my plan for Lent. Full on. Bare and bold. Then and only then can I rightly own my role in Friday’s crime. Then and only then can I right appreciate Sunday’s surprise ending, and the unfathomable sheer gift of eternal freedom issued in my name by His… “There is therefore now no condemnation for those who are in Christ Jesus” (Romans 8:1).

read next post
Praying With Jesus. Lent: Days 1-7
archives most recent
More from Beliefnet and our partners
previous posts

I rise this morning, tired and weary, to another day of battle. Before I face it, I sleepily enter into the folds of Your garment. You stand with arms open to me. I shuffle forward and feel Your warmth surround me. In this secret, sweet place there is no fear there is no want there […]

How do I fight and win my battles?

Two particular stories in Scripture came to mind this morning as I was contemplating this question. One is from 2 Kings 18 and 19. King Sennacherib of Assyria was threatening King Hezekiah and the city of Jerusalem. His menacing words contained lies and misinformation mingled with bits of truth. This is the way of the […]

A Posthumous Lesson from Dad

A few weeks ago I found some goblets at my favorite antique store, “The Crooked Willow” just outside the little town where we work, Osakis, Minnesota. One of them was undoubtedly my Dad’s glasscutting work. I knew this would happen one day; and I often looked at antique stores to find crystal etched by the […]