Have you ever applied for a job that you really wanted … only to be crushed and disappointed when you didn’t get it?

Me too. Dozens of time. I felt frustrated when I didn’t get what I wanted. I’ve been fired and laid off, too. It’s painful. It hurt my feelings, frustrated my ambitions, and crushed my dreams – or so I thought at the time.

I recall years ago, when I didn’t get a job I wanted at a television network in Los Angeles. I thought I was perfect for the position and was so disappointed when they gave the job to someone else. I pouted for weeks.

A year later, that job – and the entire department – were eliminated.

A few years after that experience, I applied for a higher level position at the university where I was working. The dean gave the job to someone else – someone who wasn’t as qualified as I thought I was.

Six months after that, that position was eliminated.

About twenty years ago, a well-respected newspaper executive encouraged me to apply for a job in Chicago. Alas, I didn’t get the job and was so disappointed, as I would have loved the opportunity to work with that executive.

But in less than a year, he left Chicago to move to Maine to head up another media company, and not long after that, the Chicago newspaper was sold.

Some years ago, the newspaper I worked for offered me a buyout package as part of their efforts to gradually downsize the company. I was hurt that they didn’t value me enough to want to keep me. In fact, I was so hurt and so angry that I wrote a book about my experience: “A Peacock in the Land of Penguins.”

Twenty years later, the book I wrote has sold over 400,000 copies and is now published in 23 languages worldwide … while my former newspaper employer has gone bankrupt.

The Taoist philosophy teaches that we never really know whether something is bad or good. A blessing can turn out to be a curse … and misfortune often turns out to be a blessing. We don’t really know for sure until time has passed and we have the advantage of hindsight. 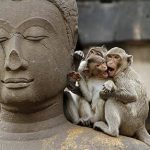 America Needs a Declaration of Interdependence