Jon & Kate Plus The Rest Of Us

Here’s the thing about parenting: it’s hard. Really. It’s hard. Oh, sure, it has its easy moments – and the reward is immeasurable – but end of the day it is a whole lot of hard work and it’s hard work regardless of whether you have four or two or even just one child.

But if you have eight children? All of them small? My head kind of explodes at the degree of difficulty involved in that kind of work.

Which is why I have trouble condemning Kate Gosselin for being a little bit screechy. I mean, I get screechy – I get screechy far more often than I’d care to admit – and I only have two children. I’m pretty sure that I would lose my mind if I had eight.

(Yes, I know that the Duggars have – what? – eighteen. But their’s is a whole different system of organization: the Duggar kids are not multiples and so there’s a generous spread in their ages, and Duggar mere and pere take full advantage of this spread. Parenting in the Duggar household is run on a sort of middle management model, whereby the older kids become middle managers as they mature and take on responsibility for caring for their younger sibling while their parents oversee their work in a sort of chief executive/supervisory mode. If I had a troop of underlings, I too could raise eighteen kids. Not that I’d want to, but still.)

Where was I? Right: the seeming impossibility of raising a whacking brood of multiples. I don’t know how anyone does it, but I imagine that doing it has to involve the parents – or at least one of the parents – being a bit of a hard-ass. Somebody has to be in charge. Somebody has to shout to be heard above the din. Somebody has to be able to get everyone to quiet down and settle down and listen. And I imagine that that looks a little more like a military operation than it does a teddy bear picnic. So, yeah, when I said last week that there was maybe something to learn from Kate? I think that this was it: that sometimes we have to recognize when life calls on us to be a little tougher, a little harder, a little less likable. Raising children sometimes requires that of us, regardless of how many children we have. The example of Kate – of Kate and Jon’s situation – can, perhaps, serve to remind us that sometimes, as parents (as mothers) we have to buckle down and be the tough guy, even if we don’t like what that might look like.

Although maybe it shouldn’t look so much like what it looks like for Jon and Kate. I don’t know. Those are some pretty extreme conditions.

I’ve watched a little Jon & Kate since last I wrote about this. It’s fascinating and horrible in equal measure: these two people have a tremendous load to carry, and it doesn’t help that they’ve chosen to broadcast their effort to the world, and watching them struggle to work their way through the very difficult work of raising a truckload of small children while the world watches their every move makes me cringe. And, yes, watching Kate struggle to keep her temper or struggle to communicate with her husband or struggle to just be calm also makes me cringe. When she fails in these struggles, it’s hard to watch, because I recognize the struggle, and because I – and imagine many of us – worry that we, neither, would be able to hold it together.

I watch Kate and I think, she’s doing the best she can. I watch Kate and I think, she’s failing. Which is entirely unfair, in a way, because who am I to judge? But it’s also not unfair, because she (and her husband) are putting their parenting and their marriage on display, inviting us to judge, and who among us can resist such an invitation? Especially when it allows us to reassure ourselves that at least we do not yell at each other, at least we are not shrill, at least we are not falling apart.

But we should – shouldn’t we? – remind ourselves: there but for the grace of God and fertility and television cameras go we.

And: let we who are without such parenting or marital sin cast the first stone.

And: be us not so proud.

Parenting is hard. Marriage is hard. We all stumble sometimes. We all struggle. That our stumbles and struggles are not caught on television cameras is something for which to be thankful, but it does not absolve us, it does not make us perfect. 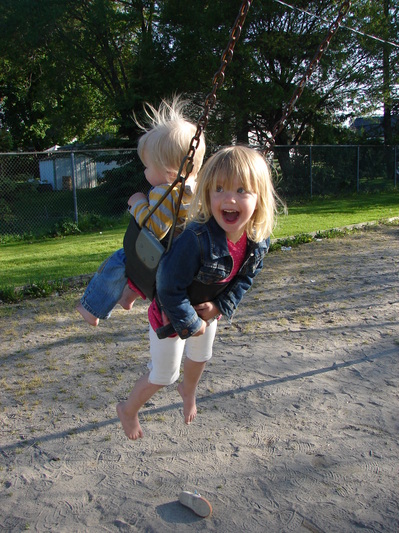 Wordless Wednesday: Happiness Is A Swingset Built For Two
archives most recent
More from Beliefnet and our partners
previous posts