What Makes A Mother

For years – since my early childhood – my mother has recounted for me the story of my birth. On my birthday, of course, but also, sometimes, on her birthday, and always, always on Mother’s Day. The day of my birth, she would tell me, was her true birth day, her true Mother’s Day, the day that she became who she was, who she was meant to be: a mother. My mother.

I did not know then that she’d already had a Mother’s Day, a birth day, a birth before my own.

My own birth story, I knew by heart. She’d told me countless times about how she hadn’t known that she was in labor with me (a ‘silent labor,’ she said the doctors called it), about how my dad had gotten suspicious when she became unusually cranky one afternoon and called the doctor and described her state and then spent hours with his hands on her belly, timing the contractions by what he felt rather than by what she felt. She told me about how it really felt, for her, as if they’d brought me into this world together. She hadn’t been alone during my birth. She’d been surrounded by love. What I never knew was, there’d been another birth, a birth before mine, a birth far less happy. And so I never knew that she clung to the happy story of my birth as though to a life-raft, something to keep her afloat whenever she felt swamped by the dark waves of the memory of that other birth.

Last year, she told me the story of that other birth when she finally told me that I had – that I have – a brother, somewhere, a brother who was given up for adoption. She told me that story, and it broke my heart into a million pieces. Then she started her own blog, and told the story to the world, and, I’m sure, broke more than a few more hearts:

My story
starts with my mother. In 1942, my mother was 18 years old and dating
my father. Mom got pregnant. My maternal grandparents were God-fearing
farm folk, my paternal grandparents were quintessential British snobs.
Both families were horrified that this scandalous behavior had
occurred in their family. Mom might as well have been branded. My
obviously pregnant mother and my father scurried away in the dark and
wed. Three months later I was born. My paternal grandparents never let
my mother forget that their only son “had to marry her,” and as I was
growing up it was obvious that I was still an embarrassment to them.

Fast forward to 1962: I was a very inexperienced 20 year old, madly in
love with a dashing pilot, 22 years my senior and married. He was going
to leave his wife and marry me. We ran off together. I got pregnant – but he already had children and more children
were not in his plan. My father wanted to have him arrested, and my
mother began the nightmare of reliving her shame.

As soon as I began to show, my parents sent me to a home for unwed mothers… I tried to kill myself while I was there. The pain and loneliness were unbearable. Neither Mom nor Dad ever visited me there; it was too painful for them. Several young women carrying ‘illegitimate’ babies came and went during my three months there. All cried themselves to sleep every night…

I went into labor in on a beautiful July afternoon in 1963. The staff told me to call them when my pains were five minutes apart. I didn’t have my mother or a husband there to support me, so I walked the gardens for five hours, by myself, because I didn’t know what else to do. I was scared. When the pains started getting closer, the Home called my parents and then called a cab to take me to the hospital. I went to the hospital all alone. I delivered my beautiful son all alone.

I was told that, because I was giving my son up for adoption, I shouldn’t see him because it would make it harder for me. I saw him. His perfect little face will be forever imprinted on my mind and the intense love I felt for my baby has never gone.

I think about her story – the story of the first time that she became a mother – every time that I think about what it means to be a mother. Because she did become a mother that day – despite the fear and the pain and the loss, there was a birth, and there was a child, and there was love. And so even if the birth of her motherhood lasted only a moment, even if it was only an instant of heartburst before the enduring sacrifice and heartbreak, it nonetheless was, and it shaped her.

I am so proud that she is my mother. 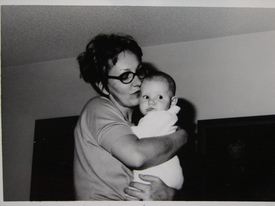 Copyright Catherine Connors 2006 – 2009. Portions of this post have been adapted from Birth: A Love Story; some portions are excerpted with permission from The Bad Grandma, copyright Judy Connors 2009.

To All The Moms That Blog, And More (A Mother's Day Salute)
archives most recent
More from Beliefnet and our partners
previous posts