We first faced this dilemma last year, when we were considering moving Emilia into a more formal preschool, and I wrote about my anxiety over the decision then. We decided against it for the time being, but then the school called us just this past week to ask if we’d consider enrolling her for pre-kindergarten. So here we are again, and again, I’m flummoxed.

To Montessori, or not to Montessori: that is the question. Among others.

Soon, Emilia will be old enough to attend the well-regarded Montessori school that is just around the corner from our home. Which means that she would leave the lovely preschool to which we have all become well-attached in the year or so that we have lived in this neighborhood, and move on to a more regimented, learning-focused environment, when she is just shy of four years old.

She’s been pretty happy in her preschool, which she attends three days a week. But she’s a little ways beyond the other children her own age in speech and movement and general activity, and so – with our permission – she was moved into a higher age group where she could move beyond the things that she’d already mastered and not run circles around the other children in the room. And so far, it’s been fine, but my heart does ache, just a little bit, when I see her in there with all the bigger children, her tiny self asserting her dominion in whatever corner she has staked out, defying anyone bigger to treat her as smaller, and I wonder, could we – should we – do better with this? Place her in an environment where she’s not necessarily the smallest or the youngest (or, conversely, where she is not, by whomever’s standards, the smartest or the fastest), but where activities are tailored more to her specific needs?

(There’s a whole other post here, waiting to be written and filled with heartache and confusion, about how to do what is best by my spirited little dictator – how to adequately provide the stimulation and learning that she thrives upon while still allowing her to be the wee child that she is. I never, ever want to smother her with concerns about maximizing her potential or aspiring to whatever excellence I think she might attain or like nonsense – and I do think that it’s nonsense for parents to pressure their children, especially their small children, toward such things – but neither do I want to close off opportunities for her, nor do I want her to become bored or enervated. All of which is to say – my questions here have far less to with ‘what is best for her development’ and everything to do with ‘what is best for her soul?’)

Her daycare is very good about early learning and engages children, within their respective age groups, in activities that are designed to stimulate their curiosity and facilitate interest in words and numbers and science and craft and whatnot. I think that it’s more than adequate as a preparation for ‘real’ school later on. But then again, Emilia’s ‘skipping a grade’ – in freaking nursery school – concerns me. Is keeping her with older children the answer? Or do I need to be seeking out a program that is more suited to her, as she is, at her age? And might that program be Montessori?

We visited the Montessori school around the corner. It was very impressive. But it was so markedly unlike her – noisy, chaotic, bright, messy, playful – daycare that it was almost disconcerting: quiet (although clearly happy and engaged) children busy with quiet activity, all in coded dress (nothing extreme, just variations on navy blue and white kiddy ensembles) and all seeming more mature than their four-plus years. More mature in many of the ways that Emilia is herself already ‘more mature’ – studiedly reflective and tending toward extremely close engagement with tasks at hand – but also more, I don’t know, mature in that mini-adult kind of way that spooks me when I see it in her, and makes me worry about the possibility of squashing, even just a little, the silly, free-spirited child that she is at her core.

And I just don’t know enough about these things, and it’s a lack of knowledge that weighs upon me as a lack that I cannot afford. Might Montessori be the right choice for her? Will her daycare suffice? Is ‘sufficing’ sufficient? How am I to know what’s best for her, what’s truly best for her, both the child that she is and the full person that she’s in the process of becoming?

Revised and updated from Her Bad Mother. Copyright Catherine Connors 2006 – 2009. 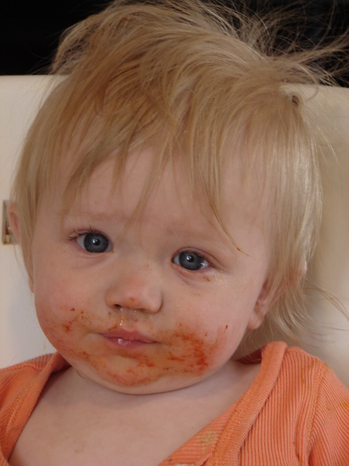