I’ve been meme-tagged by the totally awesome Kristen! Which is very exciting, and very timely, because weren’t you just dying to know some completely random stuff about me? And by totally random stuff, I mean, not-quite-random facts organized according to letters of the alphabet. Behold!

Accent(s): With adults – Canadian (tho’ I’ve been known to insist that there is no such thing as a Canadian accent. Who, me? Say a-boot? Eh? Never!)

With my child – Muppet or Gangsta.

Booze of Choice: Very, very dry vodka martini, shaken, with olive. But that was put to the test recently.

Chore I Hate: Every last freakin’ one of them. What chore do I not mind? Putting clothes into the wash. (Oh, the accomplishment! I have cleared the floor – yes, the floor – of laundry!) What chore do I especially hate? Taking clothes out of dryer for ironing, folding, and putting away. (Kills the aforementioned accomplishment buzz. I’m not done yet?)

Dog or Cat: Have Siamese cats, but they’re not so much cats as they are scrawny cross-eyed dogs that have Problems With Authority. Love dogs, want dog, won’t get dog anytime soon because am lazy and worried about more mess in already messy household. However, if a dog ever does join our household, she will be a bulldog and she will be named Lady Margaret Finnegan O’Flaherty of Bath.

Favorite perfume(s)/cologne(s): Creed’s Spring Flowers. What I actually smell like, day to day? Spit up.

Gold or silver: Why? You got some?

Insomnia: Are you kidding? Dudes. I have a four-month old baby.

Living Arrangements: Drafty old house that is far too small for one Future Ruler of the Universe and her entourage.

Most Admired Trait: Once upon a time – the ability to consume multiple vodka martinis while saying clever things with obscure references to, among other things, Plutarch, Nietzsche and America’s Next Top Model. Now? The ability to put on shoes with WonderBaby already strapped into the Baby Bjorn.

Are those skills rather than traits? Fine – my Most Admired Trait is that I am Clever. But note that my saying that my most admired trait is my Cleverness immediately makes me Irritating. Which cancels out the Clever as admirable.

So I’ll just refer you back to my mad skillz, noted above (Unusual Skillz to follow).

Number of Sexual Partners: See Essential Electronics, above. No, that doesn’t mean that I count vibrators as sexual partners. It means that I am an embarrass-aphobe and so do not talk about sexual activity. Well, not my own, anyway. I’m all up for talking about yours!

Overnight Hospital Stays: Two – once with pneumonia as a child, and once with birth of WonderBaby. The first time, people brought me Barbie Dolls and candy. The second time, not so much. I’m still waiting, people.

Quote: ‘Beauty is in the eye of the beholder and it may be necessary from time to time to give a stupid or misinformed beholder a black eye.’ Miss Piggy.

Siblings: One sister, much loved and much battled with.

Unusual Talent/Skill: Can change channels using remote with my toes. Also, can, like Kristen, recite names of all the books of the Bible in sequence. Am working on doing both simultaneously.

And? I can also do a mean solo re-enactment of scenes from the first season of Lost – especially ones featuring Claire (‘HE TRIED TO TAKE MY BAAAAY-BEEE!!!’) or Hurley (‘Dude. We gotta BOOK’) – but I think that only WonderBaby really appreciates this particular skill.

Vegetable I Refuse To Eat: Eggplant. Even the name is gross.

Capitalizing Words that I think are Important. Being extremely wordy when filling out questionnaires.

X-rays: Couldn’t say, because x-rays are generally not memorable occasions. Vaginal ultrasounds, on the other hand, one never forgets. I’ve had three.

Yummiest Food I Make: Are vodka martinis a food?

Zodiac Sign: Taurus or Gemini, depending upon the astrologer (was born on cusp – May 21). Yes, that does make me special.

Originally posted at Her Bad Mother. 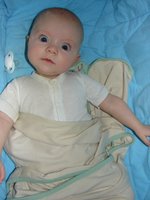