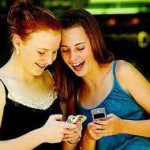 Texting has become a way of life for most people from adults
through to the young teens that own a cell phone.  It is a simple and effective
way to share information in very short, concise messages that saves the need
for those sometimes time consuming personal phone calls. The idea behind
texting is wonderful, but there may be a darker side to this communication
method for adults and teens alike. Texting can become an addiction, with some
people reporting that they feel anxious, depressed or isolated if they are not
able to send or receive texts on a regular basis.  This became quite obvious yesterday while watching my 13 year old neice text away with her girlfriend right there next to her.  No, they weren’t texting to each other (at least I don’t think so), but they were not communicating with one another either; instead they were communicating with their other friends through texting.  In my day, that would of meant having a friend over, only to ignore her, by being on the phone with someone else.

It is estimated that the average teen sends just under 3400
texts per month. This equates roughly to 100 or so texts a day or about 10
texts an hour for the time that kids are actually awake. Take out class time,
eating and other non-text compatible activities and you are probably looking at
closer to 20 texts per hour or one text every 3 minutes.  Adults tend to text at lower amounts, but
still into the thousands of texts per month when it reaches the level of
addiction.

Not surprisingly there is science behind the increasing
number of people that are finding that text messaging has become an addiction.
Researchers studying the effects of texting have found that receiving messages actually
changes the level of dopamine, which is a naturally occurring mood enhancing chemical
in the brain. This is the same chemical that linked to developing other types
of addictions, including drug addictions. The brain craves the feelings of
pleasure that the flood of dopamine produces so each text is like a bit of
instant gratification with both physiological and psychological reinforcement.

All texting is not addictive. However, when texting becomes
the major focus for a person; they are stressed when they cannot text, or they
choose texting over personal interactions there is a problem. Addressing this
behavior as an addiction instead of as a bad habit gives the significance to
the addiction that it deserves. Treating a texting addiction is not as simple
as just trying to cut down, it requires addiction recovery, behavior changes
and a healthy alternative to produce those feel good chemicals in the brain. 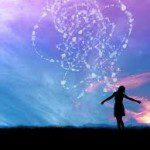 The Addiction Mindset: Finding the Middle Ground with The Law of Attraction
archives most recent
More from Beliefnet and our partners
previous posts