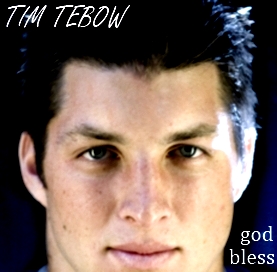 Superstar Broncos QB and outspoken evangelical made a big announcement today – he is releasing a Christian pop album.  The pigskin slinger isn’t known for his musical ability, but with the recent success of Rebecca Black I guess he figures that anyone can do it.  Not a bad assumption there, I think.

Few details are available, but I was able to track down the album artwork, which features Tim looking dreamily into the camera, ready to snatch up as much teenager money as possible.  It is apparently titled God Bless, a reference to his famous post-game speech.  The album will also feature guest appearances from Steven Curtis Chapman and Patriots quarterback Tom Brady.

I’ll keep you posted as details emerge, I am confident that it will at least be better than the latest Britney Spears album!