Let’s start off with what was right – Haley Reinhart and Naima Adedapo being in the bottom two.  In a night of mostly subpar performances, they were two of the worst.  I was surprised though, to see Karen in the bottom three.  As a result, I was even more surprised to see her booted off the show.

It isn’t that I thought she had a chance of winning – outside of Pia none of the female contestants do – it’s more that, Karen simply wasn’t bad enough this week to go home.  The futuristic costume was odd, and the Spanish gimmick was getting a little old, but there were far worse performances last night than hers.  A lot of people, including me, thought she did better than in previous weeks.  However, I certainly didn’t vote for her, so I’m not going to complain about it!  Best of luck Karen!

Barring a catastrophic letdown I imagine we will see a few more weeks of girls getting the boot until the guys are in trouble. 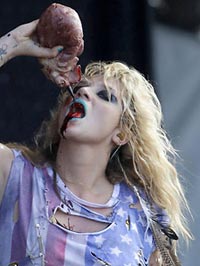