#204 Not giving money to the homeless 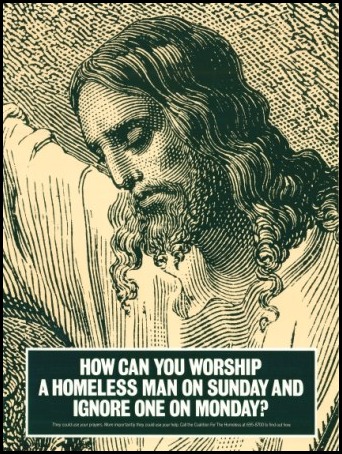 When encountering someone holding an “ANYTHING HELPS” sign, evangelicals will sooner pass them by than give them money.

There’s an unspoken bias in Christian culture that is skeptical of those asking for a handout. They wish the homeless would grab those bootstraps already and start yanking. But they are faintly aware of what Jesus said about the poor so they will sometimes give them food, but never cash, citing that they might use it to buy drugs or malt liquor.

When stopped at a light by a needy person holding a sign, the typical evangelical might rifle around a bit and see if there is a granola bar or Swiss Cake Roll to give them but they will not give them money. If the person stopped ahead of them sticks a dollar bill out the window, there’s a good chance an evangelical will say “They’re just going to go get drunk with it. Sighhhhh.”