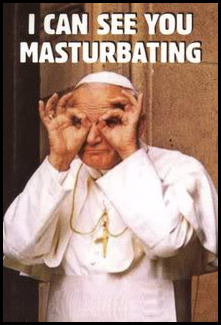 Anyone who has ever been moved by the pithy Chesterton quote or pastoral challenge to Do Something wants to issue quotes and challenges themselves. People who fancy themselves to be philosophical or spiritually minded have been getting off on spiritually-flavored musings for millenia. Now, with the advent of the internet, we’re forging new frontiers for Christian culture’s favorite pastime.

Blogs do the job (see this one right here) but Twitter is fast becoming the preferred venue for Jesus-flavored self-promotion. It’s like the Aeropagus (ancient philosophers’ mecca in Athens) of cyberspace. Twitter is where the whackmasters convene to impress themselves with their gospel-y one-liners and congratulate each other on their…achievements. “Good word, brother. Amen.” “Great insight!” After tweeting he/she enters his/her refractory period and and F5’s the page to see how many time they’ve been retweeted. Oh yeah, right there. Another RT! Say my name, bitch! Hang on, something else is coming to me, something pithy and ecclesiastical. I gotta tweet this. 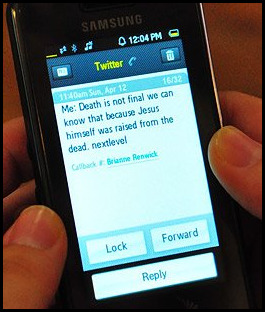 Legions of Augustine and Spurgeon devotees are theolojizzing all over the internet and Christian culture is cheering them on. Theolojizzing is a fun distraction and easier than the real thing. The real thing happens in the context of relationship and all its pesky inconveniences. Quicker to rub one out and tweet something that sounds profound and call it bearing witness to the gospel. The gospel Jesus taught requires sacrifice and community and bearing each other’s burdens, but why go that route when you could hang out at the virtual philosopher’s cafe? There’s got to be a reason Luke only spoke of the Aeropagus (aka Mars Hill) disparagingly. Ooh, I should tweet that! 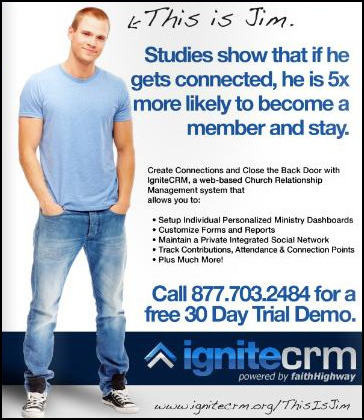