The youth group leader is a special phenomenon. As the title suggests, he leads the high school group at churches (particularly but not exclusively at large warehouse-style churches). Youth group leaders range in age from fresh-out-of-seminary to their late 40s, but they all they want to be able to relate to high schoolers. This desire manifests itself in the following ways:

1. The youth group leader tries to present himself as hip. This usually means the he will cultivate one or all of the following: a goatee, soul patch, fauxhawk, ear or eyebrow piercing (but only on the coasts; never ever in the midwest or the Bible belt lest the church leadership thinks he might be gay). He will sometimes sculpt his hair into the Joey Tribiani front-swoop that was popular in the mainstream around 1997. Whichever look he is going for, it will involve hair gel unless he is prematurely balding, in which event he will opt for the shaved head/goatee combo.

2. If the youth pastor is in his late 20s or older, he often will forego trying to be hip and will endeavor to present himself as zany. This usually means there is a ‘goofy’ picture of him on the church website with ‘wacky’ quotes about his favorite ice cream flavor and favorite movie (never anything rated R). Everything he says on the website is summarized with an “on a serious note” moment where the youth pastor reiterates his desire to glorify God in everything he does. 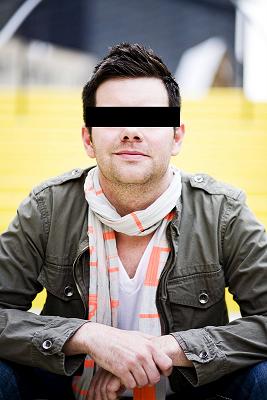 3. If a youth pastor is married, he makes a point of frequently talking about his wife in glowing terms. He will often say that he “married up” or “married out of his league.” You would think they never have a speck of conflict and that he defers to her at all times. (The youth pastor’s wife is a separate phenomenon unto herself and will be explored in a future post. She often wears Crocs, leads a Beth Moore bible study, and has VPL.)

4. A youth group leader is invariably earnest and eager to present himself as ‘relatable’ and trustworthy. When talking to a youth leader he will make a point of being a Good Listener. He does this by looking into your eyes with a slightly furrowed brow, interlacing his fingers and nodding almost constantly.

5. A youth group leader brings his acoustic guitar to youth events and plays every chance he gets. You will be hard pressed to find a youth pastor who does not play guitar.

6. A youth group leader likes to say that he is “rocking” a certain look or is “so going to do such-and-such.” When summoning a group of people he enjoys saying “Let’s rally!” and when speaking to a group will say “We trackin’?” He is very careful never to curse. His job depends on this.