We’ve all been there: the sinking feeling when you see a notification on their phone from an unknown number or see that someone has liked one of their photos on Instagram. The paranoia sets in, and we become convinced that our partner is cheating. A new study shows that paranoia might not just be paranoia after all.

A study from MarriageHelper found that one in three Americans have been cheated on. The troubling findings stem from a recent study that included 1,001 adults.

It doesn’t matter if you’re rich or poor, famous, or not. Infidelity can happen to anyone.

What causes people to cheat or stray from their relationship?

There is no single cause but a plethora of more minor issues within the relationship that causes a person to cheat when it comes to cheating. Also, women’s and men’s reasons for cheating are very different.

Women tend to stray when they need an emotional connection, while men seek attention or simply more sex. Men are also more likely to cheat than women, as research shows. A Study from CompareCamp found that 20 percent of men had cheated on their spouse while only 13 percent of women reported cheating on their spouse.

Men aren’t looking for love when they have affairs and want to seek a new thrill or blow off steam, while women are looking for companionship and are more likely to become attached to their new flame.

When you have an affair, you may not be aware of the associated risks. It’s not just a one-night stand or a few weekends of fun. The aftermath of cheating can be painful, both physically and mentally, for you, your partner, your children and even family and friends.

You put both your partners and your mental health in jeopardy. Both of you could end up developing things like anxiety, depression and even consider suicide. If you have children, they could experience the same. There is also a risk of physical and emotional violence within the house once a partner has an affair.

An affair doesn’t always mean divorce is the solution, but it can undoubtedly lead to it. Nearly 63 percent of divorce Americans reported being cheated on, and for the couples who stayed together, 58 percent of the spouses believe their partner will be unfaithful again.

When you betray your partner, the trust will never be the same again; they will always doubt in the back of their mind your faithfulness, whether they choose to share it with you or not. They feel disappointed in you and unloved, which isn’t healthy.

Your friends and family will judge you for tearing lives apart, which seems dramatic to you, but maybe you didn’t realize how much it would impact the lives of everyone around you.

Your children could feel humiliated, insecure, and most importantly, angry that you disrupted the family life. They are always most furious with the unfaithful parent. Research shows that out of 800 grown children who had a parent be unfaithful, 88 percent responded that they felt angry towards the parent that had an affair. Out of the same group, over 60 percent said they felt embarrassed.

They can start to act out and may even feel like they need to win back the parent’s love that strayed from the family. It can even lead to children often being unfaithful to their spouses in the future.

It isn’t a problem to be attracted to other people. However, it becomes one when you start to think about acting on those temptations to escape your relationship.

Having an urge to cheat should be a red flag for you to look at the issues in your relationship. Cheating will not fill those voids. It will just put a temporary fix in long-lasting matters like a band-aid.

If you are bored, try to rekindle the flame in your relationship. Put the energy you are using thinking about other people back into your partner and communicate with them. If you find yourself spending too much time with someone you have a crush on, stop. You’re giving yourself too much of an opportunity to be tempted.

Get rid of the stigma that counseling doesn’t work and is outdated. Seek counseling, whether by yourself or a couple’s session, to help you both understand where the problems are in your relationship and how to fix them. It’s a joint effort, and your partner will respect you more for being open and honest.

Stay focused on your relationship and making it stronger, happier, and healthier because that is the key to avoiding cheating.

In the end, just know that cheating helps no one, but hurts everyone. 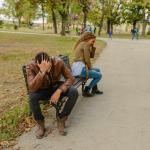 That’s Not Love: 4 Signs of Love Turned Toxic
archives most recent
More from Beliefnet and our partners
previous posts

Marriage is seen as two individuals becoming one. Two individuals take their separate lives and merge them into a singular life, forsaking all others. With that said, is the institution of marriage on the brink of extinction? It may not be there quite yet, but the results of a new survey indicate that the popularity […]

A new study shows four out of ten U.S. adults are living without a romantic partner or spouse.