Flags of My Father in Law 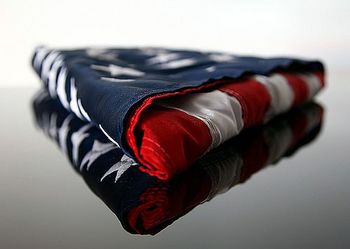 We buried Amy’s father’s ashes this weekend in a beautiful church garden in suburban Chicago. Because Austin had served in the Air Corps during World War II, we had military honors at the small ceremony. Two airmen from an Air Force base in Missouri came. The last two ceremonies had been active duty suicides from the Iraq war.
At the beginning of the ceremony, the two men ran their white gloves along the edges of the triangular flag-bundle, and saluted it. They then peeled it open, one triangular section at a time, until it was a long narrow strip, the full length of the flag but still folded. Dramatically, they suddenly unfurled the full flag, angling it toward the loved ones. Each of us gasped silently.
After lovingly folding the flag back up, triangle by triangle, the Air Corp representative walked to my wife, handed her the flag, saluted, and said,

“On behalf of the President of the United States, the Department of the Air Force, and a grateful nation, we offer this flag for the faithful and dedicated service of your loved one.”

One of them walked 20 feet away, raised his bugle and played taps.
I don’t think we expected to be quite as moved by this experience. It had been 63 years since Austin had served in the Air Corps. He bore no physical scars from the war and had lived until 94. We knew the airmen knew nothing about him or the particulars of his service, and that they utter the same script thousands of times, including for men and women who died recently in combat. It almost seemed embarrassing that they had come all this way to pay tribute to Austin.
Yet the effect was overwhelming. When they saluted the flag, they were saluting Austin, too. And when they said the President of the United states and the grateful nation was thanking him, it’s like somehow they knew everything. They knew he’d lost both of his brothers in the war, a devastation that shaped him in ways the family accepted but never really understood. (Would he have been that stoic without that experience? How did the war shape what kind of father he became, what kind of a girl my wife was, and, glancingly, what kind of grandchildren are growing up now?) The effects of war trickle through generations, unseen.
The ceremony seemed to say: we don’t know the particulars but we suspect there were sacrifices, perhaps severe. And we understand, and offer our thanks.