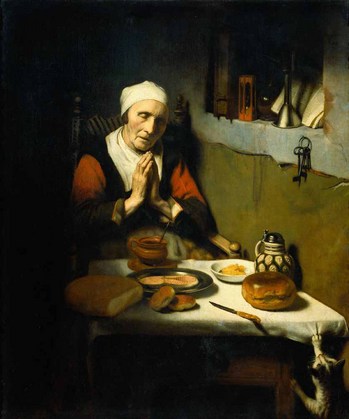 Is praying becoming a religion unto itself?
Consider this: 39% attend church weekly yet 75% pray at least weekly, according to the Pew Religion Forum.

In fact, 58% of Americans, and 66% of American women pray daily.
And maybe most remarkably: 35% of those who don’t identify with any religion at all — the “unaffiliated”– pray weekly or daily
That means there’s a large number of Americans who don’t attend church regularly but pray a great deal.
For some, their prayer life flows directly from their church life — a way to fill the gaps between visits to a House of Worship.
But these statistics, as well as the popularity over the years of books like the Prayer of Jabez and The Secret and many other devotional books, show that prayer has become sometimes detached from the tradition of church. Call it Prayerism.
People are turning to books, TV shows, or bloggers for prayer insight. On Beliefnet and other websites, users are turning to “prayer libraries” and online prayer groups — often asking questions heretofore reserved for their own clergy. Consider some of the questiions fielded by one of Beliefnet’s prayer advisors, Sheila Walsh:
“How can I be humble and also pray for myself? How can I make praying a habit, instead of just praying when someone asks for prayer? How is the best way to teach children to pray? Should you just pray or should you also study the bible and/or do devotion. Is there an order that you should do them in?”
Is this phenomenon, people who pray outside a particular tradition, a positive or negative trend?
If you’re one who feels that spirituality detached from a strong church or religious tradition is risky or imperfect, then it should be a sign for concern. Americans are serving as general contractors on their own spiritual project, perhaps a reflection that their clergy person isn’t doing the job.
Another potential problem is when people pray entirely for God to solve problems — God as a gum ball machine, as Rick Warren puts it.
On the other hand, prayer detached from a religious tradition may be seen as a sign that people are letting go of anxiety about the “right way” to pray and aspiring simply to strengthen their connection with the Divine. It was Bill Graham, after all, who explained, “Prayer is simply a two-way conversation between you and God.” For many, it’s not a replacement for traditional religion but a supplement.
And for those praying outside a religious tradition — the orthodox Prayerists — it could be argued that these Americans have found ways to connect with faith, even when alienated from religion. Taken as a whole, the emphasis on prayer may be seen as powerfully positive movement, imbuing more spirituality into religious practice, putting renewed focus on the most soul-ful part of faith — the connection to God, and the desire to live a Godly life.
Also printed on The Wall Street Journal Online.