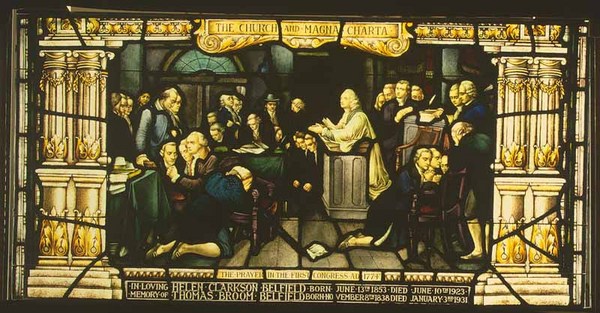 John Adams wrote to Abigail on July 3, 1776 that July 2 ought to be celebrated not only with “bells, bonfires and illuminations” but “as the day of deliverance, by solemn acts of devotion to God Almighty.”

It makes sense since many Americans at the time viewed it as a Holy War.
Some believed that unless colonists rebelled, the Church of England was going to send what one preacher called “an Army of Bishops” to suppress Americans. “Is it not enough that they persecuted us out of the old world?” asked Boston minister Jonathan Mayhew. “Will they pursue us into the new to convert us here?”
Ironically, some raged against Great Britain for supporting religious tolerance. After Parliament passed the Quebec Act, giving religious freedom to Catholics in Canada, Alexander Hamilton fumed, “Does not your blood run cold to think that an English Parliament should pass an Act for the establishment of arbitrary power and Popery in such an extensive country? Your loves, your property, your religion are all at stake.”
Some argued that rebellion against Britain fulfilled a divine apocalyptic plan. Rev. Samuel Sherwood declared that Great Britain was the seven-headed beast mentioned in chapter 13 of the Book of Revelations while Joseph Warren said the war pitted “the cause of heaven and against hell–of the kind Parent of the universe, against the prince of darkness.”
Finally, many Founders believed it was a religious war in that their greatest ally was God. Time and time again, the patriot leaders called upon the Almighty for help – and ascribed battle field victories to the intervention of what George Washington called, “the God of Armies.” In 1779 the Continental Congress reminded Americans how the nation had “without arms, ammunition, discipline, revenue, government or ally, with a ‘staff and a sling’ only, dared, ‘in the name of the Lord of Hosts,’ to engage a gigantic adversary.”
In his most disconsolate moments, Washington despaired that he must rely on God because he surely wasn’t going to be able to count on his poorly trained and occasionally mutinous army: “Providence has heretofore saved us in remarkable manner and on this we must principally rely.”
Amazingly, this was the perahps the first and last Holy War that resulted in widespread religious freedom — one of America’s greatest achievements. We are among the most religiously diverse, and religiously free, nations on earth. The Founders’ approach for religious freedom — promoting religion by having government leave it alone — has worked magnificently well. Thank you, Founders.
Happy Fourth of July.